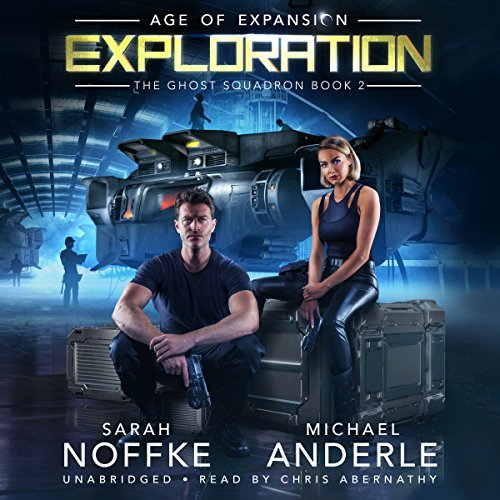 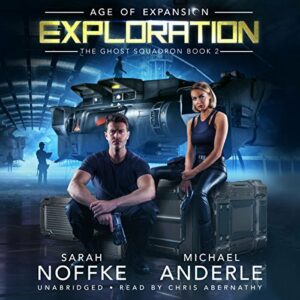 Kill the bad guys. Save the Galaxy. All in a hard day’s work.

Eddie and Julianna are hell bent on tracking down Vas and making him pay for his crimes. He’s armed and dangerous, and to make matters worse, he’s on the hunt for a devastating weapon that could bring destruction to the Federation and all its people.

Someone has to stop him.

Eddie and Julianna, along with her trusty E.I. named Pip, must seek out the expertise of specialists who can break into the enemy’s network. That’s the key to beating Vas. They’ll also need more pilots and better ships.

But as Ghost Squadron grows, so do the dangers on the fringe of Federation space. They still don’t know who is behind all the attacks—the one pulling the Brotherhood’s strings—but no matter what, they’re going to bring this faceless enemy down.

*NOTE: If cursing is a problem, then this might not be for you.

My original Exploration: Age of Expansion audiobook review and many others can be found at Audiobook Reviewer.

The Ghost Squadron has new needs and therefore more members are required. Their new mission is finding Vas and the truth about a powerful weapon that could bring the Federation to its knees.

This was another exciting and fast-paced story. We meet again the same characters as in the previous book, but there are also new additions. They all have different personalities and different quirks, but one thing is for sure: there will not be a moment of respite… except for when they take a break and enjoy some strong drinks.

The mood is again a light one, courtesy of Eddie, and the never-ending banter among the crew, but will not impede the evolution of some of the characters. I especially enjoyed Pip’s remarks and his contributions to the team.

It was a funny and entertaining listen but I missed some more character development, which would have allowed me to connect better to the characters. I think this book may work great for those in search of adventures and a light read, but for those who like the stories focused on the characters, there are some things lacking.

Chris Abernathy’s narration is perfect for this series. His casual style matches the lightness of the story, even though there are very serious things at stake here. I am glad that we see less of General Lance Reynolds, since Abernathy’s screaming when interpreting the General was a bit too irritating for me. For the rest, the character’s interpretations were spot on, and they all were distinguishable and brought to life thanks to Abernathy’s talent.