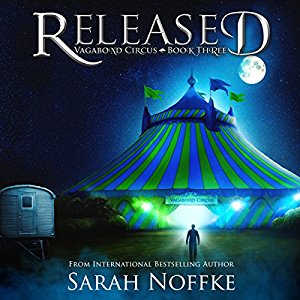 My original Released audiobook review and many others can be found at Audiobook Reviewer.

We left ‘Paralyzed’ with the news that Knight was the new legitimate owner of the Vagabond Circus. In this last book of the series we will find a much darker circus than the one we previously found. Knight’s personality will influence the crew and their acts will invariably change to become more daring, more dangerous and a lot darker. Nobody is happy with these changes, but Knight has always Sebastian and Gwendolyn in tow, which will make an open attack impossible. The artists at Vagabond Circus will affront this hopeless situation with intelligence and many will changes and grow under the circumstances. And they will discover a new secret about Finley.

It is amazing how pleasant Noffke’s books are. Her power resides in greatly developed characters and polished plots. If the previous book felt a transition between the beginning and the end, this one really answered all the open questions and put all the pieces of the puzzle together. It is what I also like from Noffke’s books: everything forms part of a big scheme, and once everything falls into place you realize that there was not any other way in which the story would work better. The end was the one meant to be. I can also say that it almost brought tears to my eyes, and this is because Noffke’s characters matter. They breath, think and have motivations. They were almost my friends for the hours that I listened to the book, and I have to say that I already miss them. One can write very clever plots, but without great characters, a book will have no soul. And this might be why I enjoy Sarah’s books so much, because they have a soul, and they matter.

Steve Barnes did a great job, again, at narrating the book and transmitting the emotions of every character. I also have to say that he is great at making different voices and one always know who is talking, something I appreciate from an narrator. It definitely adds another dimension to the story.

I am very happy to have the opportunity of listening to these series. Whenever I start a series by Sarah Noffke I know that I am in for a good ride. She has made it! Again!