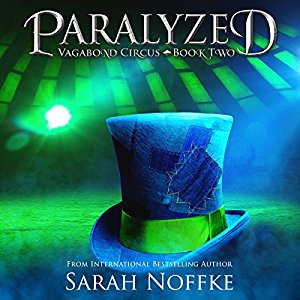 My original Paralyzed audiobook review and many others can be found at Audiobook Reviewer.

Second installment of the Vagabond Circus. We left Zuma and Finley going after Jack, who had gone to Knight’s warehouse to take revenge for David’s death. Everybody is heartbroken at the Circus, and Titus will have to find a way to keep the show going on. But the real action will be with Jack, which will need to be saved by Zuma and Finley from a terrible situation.

As I have said before, one of Sarah Noffke’s strong points is the character development. Each one has a distinctive personality, and they almost feel real people. The main characters, Zuma, Finley and Jack, will suffer a great evolution in this book and a bit more depth on some of the secondaries will be shown too.

As with other trilogies by Sarah Noffke, this second book shows the characters evolution but will leave the reader wanting more, since this story is just a bridge joining the first and third books. Some mysteries will be revealed, just to add more questions to the equation. In fact, very little happens in this book, despite being wonderfully well written and keeping the listener’s interest. Something that bothered me a bit was the romance. It felt more present than in the previous book, and at times it was just too much for me. I think that eliminating or reducing the romance would have made for quite a shorter book, taking into account what little happens in it.

There were a couple of details in the book that did not seem realistic, but I concede Noffke the liberty since this is a YA book. I tend to dislike YA literature, but I always make an exception with Noffke’s books, because I really love how she writes. Really, her character crafting is exceptional.

Steve Barnes’ narration was very good, as usual. He made the dialogs sound natural and has a pleasant tone of voice. Something I am always grateful about is when I can distinguish the characters by the narrator’s interpretation, and Barnes is very good at this.

I really enjoyed this book, despite the romance part and the few events happening. I just want to listen to book three and see how everything will unfold.