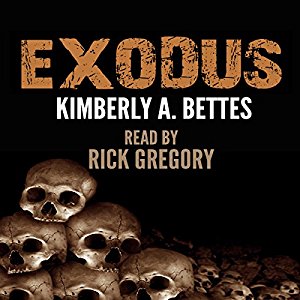 At the height of the Great Depression, thousands of families who have lost everything are left with no choice but to make the pilgrimage westward in search of a new life. Some will find what they’re looking for. Some will not and will then be forced to make the long journey back home. Then there are the others, those who never make it to either place because they made a stop along the way in a town called Exodus, an abandoned silver mining town in eastern Arizona where nothing good ever happens and most folks never leave.

The Carlsons—John, his wife Anne, and their newborn baby James—are one of countless families heading west, and they’re one of many unfortunate families who decide to make a stop in Exodus. The sign on the highway promises food and gas, both of which the Carlsons need. But the sign doesn’t advertise all that Exodus has to offer.

It doesn’t mention the torture.

Caught now in a horrifying world of madness, Anne has to fight to save her family, though doing so will push her to the very brink of her own sanity.

*A horror novel for mature audiences only.

I have received a free copy of this book in audio format from the narrator in exchange for an honest review.

After the crash of the 29 many people started to move west in search for a new opportunity in life. Anne, her husband John, and their baby James, are one of these many families who lost everything and dreamed of something new. They are forced to make a stop in the way due to running out of water and gas, and stumble upon Exodus, an abandoned mining town, where just one family seems to remain. They run the only businesses left in town and make their profits from the constant current of people moving west. But just some are able to continue their way after making a stop at Exodus.

I was not sure what I was up against before starting this book. I got a warning saying that it was going to be a very crude book. And it was, but in a good way. It often happens in horror stories, that the author goes for making a statement and imprinting some images in the reader’s mind, but at times there is not much of a plot or characters that are more than two dimensional. This is not the case. Exodus is a tale of horror, gore, cannibalism and incest. It is so gruesome at moments that I was torn between the need of taking a break and continuing listening to it. it is incredible, with very powerful images and many horrible facts tied together; but it is also wonderfully well written, with credible characters and relationships, that in very disturbing way, make sense.

There is a soundtrack to this book, which helps set an atmosphere to this story. In a way it is what it shows how disturbed is one of the characters, but also reminds us of the fact that the book is set in the early 30’s. After a while the song stuck in my head, while I was able to see Frank cutting meat on his cutting table. And the song kept playing on and on. On and on.

I really enjoyed Rick Gregory’s narration. He has a soothing voice, which contrasted with the horrible facts happening in the book. Gregory is also able to deliver different voices for all the characters but in a subtle way, which makes you forget that you are listening to a book, and makes you believe you are watching it. He included excerpts of the song which Frank listened again and again, ‘Ain’t we got fun’ by Van and Schenck, which I think worked great to set the mood. I think it is worth mentioning that this song was an anthem of the Roaring Twenties, and it appeared on several movies of the time. It was a great choice by the Bettes and a great choice by Gregory to include excerpts along the book.

I found the audio production mostly correct, but I noticed a noise 34:53, just after announcing chapter three.

I absolutely loved this book, much more than I expected. It is indeed a gruesome book, ideal for horror fans, but I also enjoyed the power of the unique characters in the story, which makes this story stand out among others.

I took the liberty of posting the mentioned song here. Enjoy!