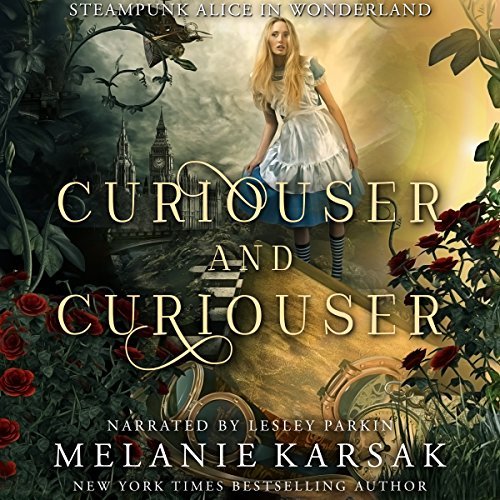 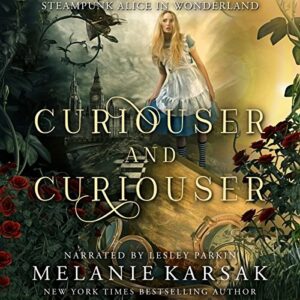 To save the Hatter, Alice must work with the one man she despises so much that she might still love him.

Alice thought she’d turned over a new leaf. No more working for Jabberwocky. No more making deals with the ruthless Queen of Hearts. No more hanging around The Mushroom with tinkers, tarts, scoundrels, and thieves in London's criminal underbelly. But she’d been bonkers to dream.

Hatter’s reckless behavior leads Alice back to the one person she never wanted to see again, Caterpillar. Pulled into Caterpillar's mad schemes, Alice must steal a very big diamond from a very royal lady. The heist is no problem for this Bandersnatch. But protecting her heart from the man she once loved? Impossible.

My original Curiouser and Curiouser: Steampunk Alice in Wonderland audiobook review and many others can be found at Audiobook Reviewer.

Retelling the classic Alice in Wonderland for adults and with a steampunk vibe, this book is a masterpiece in itself, and I have no shame in saying that I enjoyed it a lot more than the original. This Alice is older, probably in her twenties, and has a younger sister with fragile health, who is in love with Henry the hatter. The Caterpillar here is called William, and is someone very important to Alice. He needs to complete a job for the Queen of Hearts, and Alice, despite having left behind her life as a petty thief, will join forces with William in order to save him and also maybe save her soul.

It could be due to how famous Alice in Wonderland has become, that I felt a bit underwhelmed when I read it, but this did not happen with Curiouser and Curiouser. I found it compelling from the very beginning, with interesting characters and amazing events. The book doesn’t follow the same story line as the original, it’s more like a shuffle and mix, but it felt quite exquisite. There are some flashbacks to Alice’s past, which gives us some background about her. These flashbacks appear alternating with the main story, creating a complex and rich weave that make for a really polished book.

I expected the steampunk to be my favorite aspect of the book, but I think what I liked best was how dark this story is. If Alice in Wonderland is a children’s book, this is quite the oposite. The first scene where we see the Queen of Hearts was an impressive one, and I don’t consider myself easily impressed by horror in books, but it was so vivid, so dark, and so unexpected, that I felt touched by it. I could almost smell the stench and feel the horror Alice felt.

And if all that was not enough, the book is beautifully written, with rich and elaborate prose, characters who feel real, and Alice… Alice is simply charming. There is also love in this book, but not the sappy one that we see in many romance books. This one is real, painful, and deep; and it complements the story perfectly.

Lesley Parkin’s narration was perfect for this story. She delivered great characters’ interpretations and transmitted their emotions in a powerful way. I was able to recognize every character and follow conversations without any issues. I just notice once or twice that a small part of the narration sounded like the last character talking, but it was barely noticeable.

I would recommend this book to everybody: wether they enjoyed or not the original book, and whether they are or not into steampunk. It’s simply a very well told story with some powerful scenes.