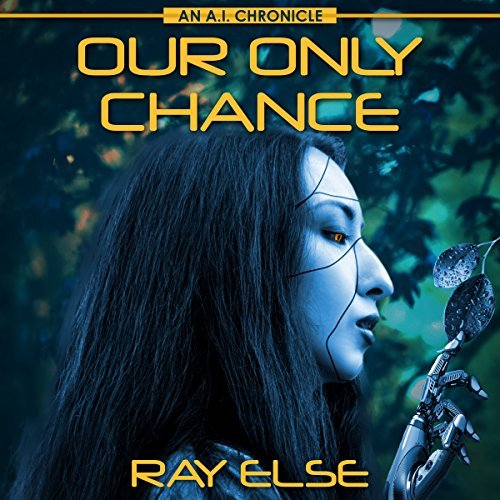 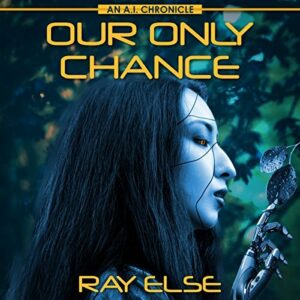 Our Only Chance: An A.I. Chronicle by Ray Else
Published by ELSE on 10-02-17
Genres: Science-Fiction
Length: 6 hrs and 4 mins
Format: Audiobook
Source: Author
Buy on Amazon/Audible
Goodreads
Overal Rating:

A different kind of Frankenstein.Einna is a lot like other teenage girls, naive, idealistic, secretive, disobedient and interested in boys. Only Einna is not human, she is an A.I. android. Her creator, her mother, is Manaka Yagami, the first female tech billionaire. Einna has a plan to make herself human, if she can keep Mother in the dark and avoid the clutches of the notorious Yakuza.

Manaka Yagami is a very talented woman. With the assistance from a professor and the mysterious financial help he got, Manaka made her dream come true: creating a sentient A.I., which she named Einna. But the money has strings attached, and Einna will be more difficult to manage than expected. With aspirations to become human, Einna will surprise everybody.

I always love a good A.I. novel, and this one was really entertaining. It was endearing to see Einna evolve, change, and in a sense, grow. She had lots of questions about life, love, and soul; and she had an endless search for what make us human. In this aspect, it was a very interesting book, posing the classical philosophical questions about the meaning of life, and where the thin line between soul and brain is.

I was a bit bothered about how naive Manaka and Einna were most of the time. Manaka was supposed to have a ultra high IQ, but her actions most of the time were childlike, and often plain wrong. Both were in a way stereotypical characters with little evolution. This happened in general with all characters in the book. Einna makes a friend that is supposed to be very special, but from the text she sounded superficial, and there were moments where I didn’t trust her. I am not sure if it is a cultural difference but despite how good she was supposed to be to Einna, I couldn’t stand her.

Although this is supposed to be a sci-fi book, there is little science-fiction in it. Manaka’s breakthroughs didn’t feel realistic. It sounded so miraculous that some parts were like reading a book for children. I think Else wanted to show how intelligent Manaka was, and how little experience in life she had, but the result was not very credible.

The book has an open ending, which I found disappointing. It is like Else was afraid of an unhappy ending, but couldn’t also provide a happy one. After all the build up it felt totally anticlimactic.

I really enjoyed Lizza Zimmerman’s soft narration. She gave different voices to all the characters, and delivered wonderful interpretations. You could hear the difference between android Einna and computer Einna. Some characters sounded really childlike but this is just an effect of the text Zimmerman had to narrate.

It was a good book, but with such great premises, it felt a bit flat in the end. It was like a bunch of good intentions that failed to crystallize.