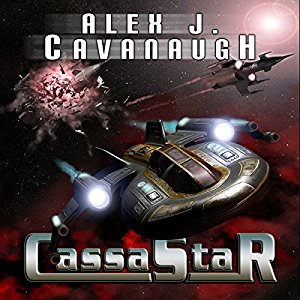 My original CassaStar audiobook review and many others can be found at Audiobook Reviewer.

Byron is a stubborn young man whose only choice in life, for some unknown reason, is becoming a Cosbolt fighter pilot. He enlists to train at the moon base of Guaard, where he will meet Bassa, one of the most strict and renowned instructors. Cassans have a special way of mental communication, along with some special mental abilities, in which Byron excels. Byron will meet some difficulties due to his difficult temper, but along with Bassa, they will try to make a difference.

This is not the typical Space Opera novel, at least not what I expected. This is a tale about friendship between two men. One of the good aspects of this novel is characters depiction and their evolution. It is true that there are just basically two main characters, and the others are flat and part of the background. I see a clear evolution in these two main characters, especially Byron, who will grow to become a great man. Byron was annoying at first, stubborn and difficult but with extraordinaire capabilities. Somehow not very original, I might say, since I have seen this kind of main character in several books and movies.

Despite being this a great story about friendship, I was a bit disappointed at the simplicity and lack of detail of this book. I expected the tale to be part of a bigger story, a bigger conflict. Towards the end of the book this ‘bigger conflict’ is more present, but we know nothing about the Cassians, the Vindicarns, and their war. How are both societies and why are they at war? We know nothing about their technology, apart from the fact that they can teleport and have special mind powers. I would have appreciated more background history. In a way I feel that this story could have been told in almost the same way without being a science-fiction book.

When listening to this book I had the impression of listening to some old science-fiction from the 50s or 60s, and that made me check the publication date, which is 2010. This impression was due to the fact that there were no women in it. If it was not for Byron’s sister appearance and the mention of one of the pilots’ mate, I would think that the Cassan society was just composed by men. I cannot believe that there were no women pilots or navigators. It just made the book feel very old-fashioned.

The narration was not bad, but not excellent either. The diction was clear and the tone encouraging, but all voices sounded the same. Michael Burnette used some music to divide the scenes which made me think of series and movies like Star Trek. I know some people are not fond of it, but I think it was a nice detail. I felt though a bit old-fashioned too, which went nicely with the book. Burnette also used some special FX for the voices when the characters were mind speaking. I think this was well done since it made it clearer when they were merely speaking and when they were mind speaking, but the chosen FX distorted the voices too much for my liking. I think he also used this effect in a different way depending on the character, so when mind speaking the voices sounded a bit more different, not a lot though.

Cassastar was an enjoyable listen, and I would recommend it to sci-fi and non sci-fi fans.