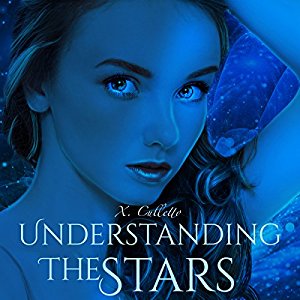 Alexandra Blackwood is minding her own troubled life when she unknowingly gets caught up in an extraterrestrial conflict. Ronan, a human with his own alien-entangled past, has been keeping an eye on her and sets out to help her escape looming abduction, and maybe win her heart.

I received this audiobook as part of my participation in a blog tour with Audiobookworm Promotions. The tour is being sponsored by Xela Culletto. The gifting of this audiobook did not affect my opinion of it.

Alexandra Blackwood is just a normal teenage girl on her last year of high school, and she works part time delivering pizzas. During one of her errands she meets a mysterious man who seems to eye her with what she interprets as fondness. Later on she discovers the he is a descendant of some ancient people taken from Earth by aliens thousands of years ago. They are doing some research on Earthlings, and this man has been watching Alex very closely for the last three years. But something goes wrong and both have to escape from an imminent danger.

I found the premises of this story very interesting, and I was decided to plunge into it right away. It is an easy listen and fast paced book. Sometimes too much. I missed some descriptions and introductions to new places. It was like ‘Alex is here, and then she was there’. I think it would have helped to create the right atmosphere if this part would have been more polished.

The same happens with characters. They are not very developed, and what we know from them is very little. I also missed descriptions here, since I did not find out until I was half way through the book that Ronan was also eighteen. We get a couple of details when we first meet him, but from this brief description I would have guessed he was much older. He was described as a man, but I would have called him a boy, like Alex was a girl.

I was bothered by how perfect Alex was. It is not that we get a lot of information about her, but everything was so perfect that it was unrealistic. Alex’s relationship with her parents did not ring true either. She came and went as she pleased and her mother did not have a lot to say about it. I just missed some of the family drama that we all have. Apart from this issues with the characters, I found the conversations forced and not mirroring real conversations. People just do not talk like that.

There is a bit of romance between Alex and Ronan. Not too much to make it annoying, but I think it is something almost mandatory in a YA book.

Lori Prince’s narration was correct, and delivered a good interpretation for Alex. I missed some more voice range for the other characters, which spoiled the story a bit. I think Prince has great interpretation skills but she needs to work a bit more on her voice. There is a sentence repeated at 3:20:05, but no other audio production issues were found.

It was an okay story but, in my opinion, it should have been much more polished before releasing the book. Characters, places and events would have needed more work.