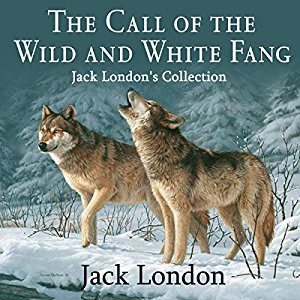 The Call of the WildBuck, a sturdy crossbreed canine (half St. Bernard, half Shepard), is a dog born to luxury and raised in a sheltered Californian home. But then he is kidnapped and sold to be a sled dog in the harsh and frozen Yukon Territory. Passed from master to master, Buck embarks on an extraordinary journey, proving his unbreakable spirit…

White FangIn the desolate, frozen wilds of northwest Canada, White Fang, a part dog, part wolf cub soon finds himself the sole survivor of a litter of five. In his lonely world, he soon learned to follow the harsh law of the North—kill or be killed.

But nothing in his young life prepared him for the cruelty of the bully Beauty Smith, who buys White Fang from his Indian master and turns him into a vicious killer—a pit dog forced to fight for money.Will White Fang ever know the kindness of a gentle master or will he die a fierce deadly killer?

A classic adventure novel detailing the savagery of life in the northern wilds. Its central character is a ferocious and magnificent creature, through whose experiences we feel the harsh rhythms and patterns of wilderness life among animals and men.

These two novels are classics of literature. No one else but Jack London was able to portrait dogs in the same way. The first is a tale of cruelty towards animals, and the search for freedom. The second in tells a different story, being about a wild animal looking for a loving owner. Despite being familiarized with both stories, it is my first time reading these books, and it could be that they feel old fashioned, or that they have been idealized over time, but I expected to enjoy them more than I did.

I don’t think I can blame the language for being old fashioned, since I have read books which were written even before, but in this case I had the feeling it was in front of a documentary. The prose was direct and with no frills, lacking the musicality of other works from the same time.

Dogs are wonderfully portrayed in both novels, and this will for sure delight animal lovers; but human characters and events seemed sometimes quite random. Human characters lacked any depth, and I could not connect to any of them. I guess this was part of London’s intention, but I also had troubles to fall in love with the dogs.

I have a more important complaint, and it is the presence of racism on White Fang. I understand this could be more common at the time the book was written, but it is still not justified, and this partly spoils the story.

Kevin Theis adjusted perfectly adjusted his narration to the style of the book. His voice was clear and sounded more like a documentary than a work of fiction. Even though it was perfect for this style, I found it too energetic at times. I enjoy a soothing voice when listening to an audiobook. This does not mean that it cannot be engaging at the same time. It seems Theis focused more on this, making the listen a bit too stressful for me. I was not able to listen to it for long periods of time.

I received a copy of this book in audio format from the publisher in exchange for an honest review.