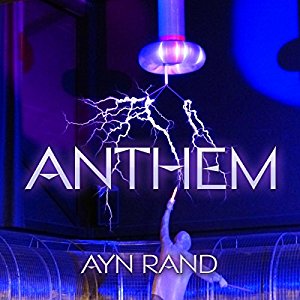 Anthem has long been hailed as one of Ayn Rand's classic novels, and a clear predecessor to her later masterpieces, The Fountainhead and Atlas Shrugged. In Anthem, Rand examines a frightening future in which individuals have no name, no independence, and no values. Equality 7-2521 lives in the dark ages of the future where all decisions are made by committee, all people live in collectives, and all traces of individualism have been wiped out. Despite such a restrictive environment, the spark of individual thought and freedom still burns in him--a passion which he has been taught to call sinful. In a purely egalitarian world, Equality 7-2521 dares to stand apart from the herd--to think and choose for himself, to discover electricity, and to love the woman of his choice. Now he has been marked for death for committing the ultimate sin. In a world where the great "we" reign supreme, he has rediscovered the lost and holy word--"I."

Being a fan of dystopian novels, I could not let this pass. Ayn Rand tells us about a society in the future where people have lost their individuality. They have names nor individual rights, and the singular pronoun ‘I’ does not exist. It was a bit confusing at first, until I realized that when they said ‘We are’, they meant ‘I am’.

The protagonist of this story is Equality 7-2521, a street sweeper who one day discovers the power of electricity and takes the initiative of showing this to the scholars. He is then persecuted and imprisoned for criminal acts against society.

‘Anthem’ and ‘Brave New World’ are the pillars where dystopian novels nowadays are based upon. Ayn Rand knew how to see the dangers of Communist Russia, and elaborated a theory of what could happen in a not so distant future.

Something that did not completely convince me was how easy was for Equality 7-2521 to escape from his imprisonment and start a new life. No one seemed to watch him or look for him. I was able to accept the rest of the tale, but I think this part could have done with some more work.

Carson Beck did a wonderful job narrating this book. His compelling tone kept me interested from beginning to end. His diction is clear and the audio production was correct.

I found this book to be less popular than ‘Brave New World’, which I had to read for high school. I find ‘Anthem’ to be at the same level, and a must read too.