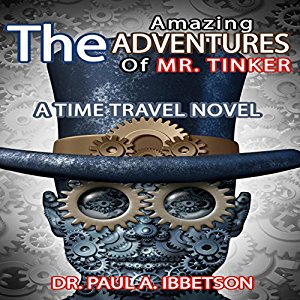 Follow the amazing Mr. Tinker, an inventor who while working for Nikola Tesla discovers time travel.

After nine of his time traveling devices, called chronoboxes, are stolen by criminal scientists, he must travel through time to retrieve the boxes and safeguard the future.

With the help of his young assistant Jovan, both will risk their lives in this exciting time travel novella.

Mr. Tinker was one of the ten people in a team working for Nikola Tesla, when he discovers time travel using some little devices of his invention called chronoboxes. But the other nine scientists have their own interests in mind and decide to steal the chronoboxes and use them for their own good.

Ibbetson’s theory is that time is resilient, like an elastic band, and any change made in the past will not affect the future in the long term. This is why at first I did not know why he was so adamant in recovering the nine stolen chronoboxes. Later on Mr. Tinker explain Jovan about some weak spots in time where modifications are possible, and that he needs to recover the chronoboxes to avoid any possible disaster caused by the criminal scientists.

Even though it took me some time to realize the motivation to recover the chronoboxes, I enjoyed the story. I found it interesting enough to keep listening to it. Sadly the book is just short of two hours, and it feels unfinished. It ends not exactly on a cliffhanger but just at the end of a chapter. I feel kind of cheated when this happens, since the writer did not even made the effort of publishing a completed story.

The book is set in the 20s – 30s, and even though it is recently written, the language, atmosphere, and naiveté felt old fashioned, like with books written around that time.

Darren Stephens’ narration was very good and perfect for this kind of story. His speech is very clear and his tone engaging. I cannot say a lot about his voice range since there are few characters in the book, and none of them is feminine. The audio production was good.

I found the premises interesting enough to want to know more about Mr. Tinker and whether he will recover all chronoboxes. Sadly, after two years, I am not sure whether Ibbetson will continue writing about this story.

I received a copy of this book in audio format from the publisher in exchange for a honest review.