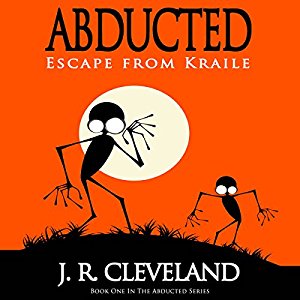 Luke wakes up during the night and hears some noises coming from the his grandfather’s barn. When going there to make sure that everything is okay he sees a red light, and discovers two aliens milking one of the cows. He will be taken in their spaceship in a mission that will change Luke’s life.

This book is aimed at young readers, but even grownups will enjoy it. Luke is transported to a different world and meets strange creatures, pursuing a very noble goal. There are a lot of Star Wars references, and I think the main character’s name is a clear tribute to the movies. It is a quite original story and is told in a very funny way, which will delight kids and adults.

I found some parts though that add little to the story, or that would have been presented in a different way since in a way they have some important information for later on. The training Luke has during flight felt just too long, and the part of the arena had the same feeling. In a way Cleveland abused a bit too much of the Deus ex Machina device. I understand that this could somehow work in a book for kids, but once they become more critic they will demand more intelligent plots.

Something that I missed was a better introduction to the background story. This is about Luck’s parents, missing for the last five years partly due to Simon on Leonidas. The introduction goes a bit too fast and the main goal of the story is just merely mentioned. I think the whole story would have worked better if we would have known more about Luck’s parents and the rest of the crew, along with the circumstances of their disappearance. Just mentioning it does not completely work nor motivate the reader.

The characters were not fully developed, but I think Simon and Leonidas were very charismatic.

What I really enjoyed was the narration. Braden Wright gave the exact amount of humor to the voices. I think the sound effects used for Simon and Leonidas were just perfect, and the book clearly benefited from the narration. I am looking forward to listening to more books narrated by Wright.

The ending does not leave an open door for a second book, so I am curious about what how the second goes. It is something good though, since I get sometimes frustrated about cliffhangers. If you have kids and teens interested in sci-fi I recommend you to try this book.