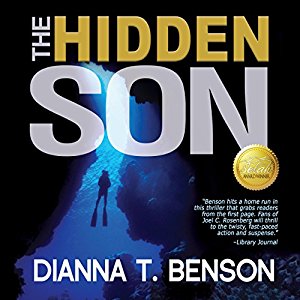 U.S. DEA Special Agent Lelisa Desmond is invited by her boyfriend as per her boss request, to take some days off at the Cayman Islands in order to let off some steam after a complicated case. Lelisa and Rick are experienced divers, and had spent some vacations on the Islands doing some diving. This time is not different, but during the dive Rick dies in strange circumstances, and Lelisa will try to find out how it happened, just to discovered that Rick was in fact murdered, and that she was the target, not him. Everything seems related to her last case, in which her boss commanded her to bury some evidence against her will. Inspector Alec Dyer is in charge of the investigation of Rick’s death, and will need to see whether Lelisa is innocent or guilty of murder.

I have to confess that I took this book due to its narrator, since Hempel is able to bring to life any story he narrates, but I was pleasantly surprised with the book. I only enjoy thrillers if the characters are well depicted, and this is the case. Both Alec and Lelisa have a solid background story which justifies their actions. In some cases I did not completely agree with how they reacted but their story justified it 100%. This is what I like in a book: well developed, imperfect and realistic characters; and Alec and Lelisa are all this.

The premises were interesting and it was very well executed, with several twists and a side story in which Alec was the main character. It all gave depth to the main story and the characters. I have to say that the book held my attention from the start and kept it until the end. If books two and three are at the same level I will be a happy reader.

I usually dislike unjustified romance in a book, but in this case it did not feel forced and I almost enjoyed it. What I do not completely agree is with the traditionalism and the focus on God as a way to improve one’s life. It could be something personal, since I don’t do well with religion in book and life in general. It is what happens when you are an atheist. If I overlooked those two things, this could be an almost five star book.

The narration was beautifully done, as always, by Joe Hempel. I repeat that I have read this book because it was narrated by him, since he has a unique talent to interpret characters, transmit emotions and make you forget that you are listening to a book. With Joe Hempel you just cannot go wrong.

Despite the two points mentioned above I enjoyed this book a lot. Benson knew how to keep the intrigue and create charismatic characters. I would say that this book would be more appreciated by a feminine public but it is not exclusively targeted towards it.