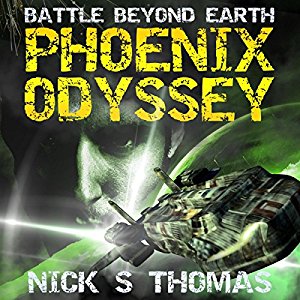 In the year 2512, the Alliance is desperate fighting against a powerful enemy. Therefore Earth decides to resurrect war criminals that have been preserved or clone the ones that have not. CJ is one of these cloned criminals, dead 400 years ago fighting against Earth. He wakes up in a world he no longer knows, having to fight for his former enemies.

The idea of this book was a very good one but after a while it starts to be a bit predictable. I found the beginning quite funny due to CJ’s stubborn attitude. It is an action packed story with not a single moment of boredom, but I would have appreciated more character development and more background information. Even though it is the first book on a series, it belongs to a bigger collection of books (Battle Beyond Earth), and although the story stands well on its own, I think it would be more enjoyable after listening to previous books. Mich Taylor was named many times and I would have liked to read more about his story before embarking on this book.

I am always disappointed when a narration is on the monotone and dull side, but the opposite can also spoil a book. Wesley Bryant’s diction is very good, and he has good postproduction skills, but I think he needs to work on his narration. It was completely overdone, which is tiresome to the listener. The narration parts were like aimed at children, with variable cadence and pauses for effect. The characters voices were too exaggerated, with very hard accents and an overuse of pitch changes. It really helped to make the characters’ voices more distinguishable but something more subtle would have been more pleasant to the ear. In general it should have been a more neutral narration. Checking on Audible, I see that this is the only book narrated by Bryant, so I understand these are just beginners’ issues. He has potential though, with a pleasant voice and very good diction, and I have found no issues on the audio production, something that beginner narrators often have and is quite annoying to the listener. I hope he continues narrating books and I would love to listen to his evolution.

Narration two and a half stars, book three and a half.