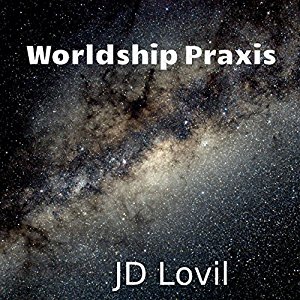 I was offered this book in audio format in exchange for an honest review.

In the 23rd century three enormous spaceships travel transporting thousands of people looking for worlds to colonize. Jack is the captain of one of this ships, the Worldship Praxis.

The books tells the daily life of the Worldship Praxis crew, how they take care of new findings and how they manage any important detail on board. J.D. Lovil uses a rich language and many sci-fi and Physics technicisms, creating the perfect atmosphere for the story. Unfortunately there is no story, nor plot, nor twists here. The bnook spans around 40 years and the only remarkable event is the meeting with another race and how they help to improve the Wordlship Praxis efficiency with their technology. I waited and waited for the conflict of the story, but the complete book is just exposition.

The crew of the Worldship Praxis spends most of the time in hibernation or drinking so much beer and scotch that I do not know how they get anything done.

Jack, the main character, is an arrogant person, but I understand that this could happen after leading his crew for so long.

Something I disliked from the book is how it seems aimed at a quite primitive male public, with expressions like ‘punish in a way that is universally female’ or ‘I was ready to go home, kiss the dog and beat the wife’. I know they are just expressions but I would just expect them in a novel from the 50s, and not in one written in the 21st century describing actions in the 23rd. This was so disappointing.

I liked the hard sci-fi technicisms and the potential the story had, but it missed very important elements of a very basic plot. The characters were two-dimensional and it was difficult to connect with them, especially since men could only think about alcohol and sex and women were just one-dimensional and only a distraction for the men.

One response to “Book Review: Worldship Praxis by J.D. Lovil”