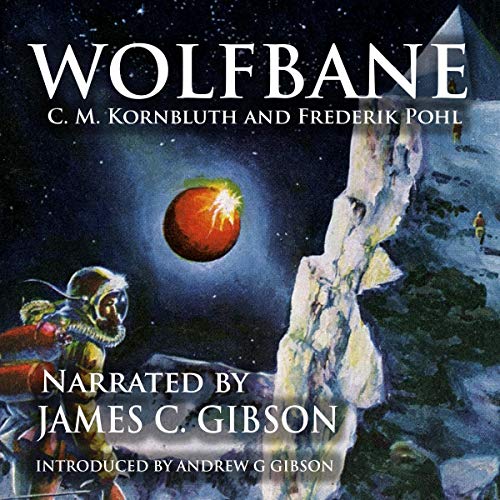 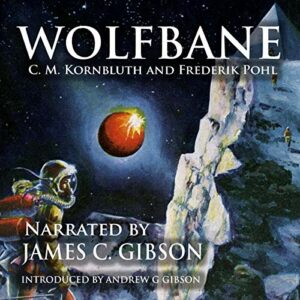 The Earth has been ripped from the solar system by a runaway alien planet, whose inhabitants have their own sinister plans for Earth's resources. Humankind is dying out, but there are those who defy convention and refuse to give in.

Feared by ordinary citizens, these wolves are preparing to fight back against the aliens. Wolfbane is widely regarded as one of the very best science fiction stories from the 1950s. It was originally serialized in Galaxy magazine in 1957, with illustrations by Wally Wood. It’s this original version of the story which we have lovingly reproduced in this volume.

Wolfbane was first released in Galaxy Magazine in 1957. There were later editions with several changes to the story, but the audiobook corresponds to the original, with a brief introduction by the editor illustrating why this is such an important piece of work and also introducing the narrator.

I love old pulp novels, and Frederik Pohl’s Gateway (Heeches) series is one of my favorites, so I was set on listening to this version of Wolfbane. I find it remarkable that it tells more or less the same story as The Matrix, which was released 42 years later. This book could be considered as hard sci-fi even by today’s standards. The authors have kept the technical aspects quite ambiguous, which renders the story still valid nowadays.

Regarding character development and dialogs, it is heavily outdated, and it has many of the issues in novels from this time. There is a total lack of character development (which was fixed in posterior editions), and even though there is an important female character towards the end, women are portrayed as damsels in distress almost throughout the whole book. I am okay with it, as this book is a product of its own time, and for the ’50s I found the premises were very original and ambitious.

The rhythm of the story seemed off sometimes. The first part feels quite slow, as the world and characters are presented, and the resolution is kind of rushed. I would have liked to have more detail there, but I imagine this is what happens when a book is co-written and deadlines are approaching.

Despite these minor setbacks, I thoroughly enjoyed the story, and I think it is a must-read for anyone into classic science-fiction and all those who thought The Matrix was such a novel concept.

James C. Gibson delivered an expressive narration, but there were some issues that we often see in less experienced narrators. I only found this book narrated by Gibson on Audible, which explains this. The audio production did not feel completely polished and there were some ambient noises that somehow found their way into the final mix. The narration speed was a bit faster than what the standard is nowadays, which was not a problem for me, but it is something to take into account, especially because the vocalization could have been improved. I have also noticed some volume changes throughout the book and the sound quality was not as clean as it should have been. The character interpretations were okay, but on occasions, they felt a bit overdone, especially for female characters. Female voices were simply not good. I know this is a pain point with some male narrators, and I would always advise going subtle if your voice range does not allow for a believable female voice. Sadly, the female characters in this book sounded almost caricaturesque.

The introduction of the book was written and narrated by Andrew Gibson, the audiobook producer. It was well done, but there was a huge amount of reverberation that should not have made it into the final book. I guess it was mostly a recording issue, but as it was interlaced with some excerpts from the book, the sudden change in sound quality was too noticeable.