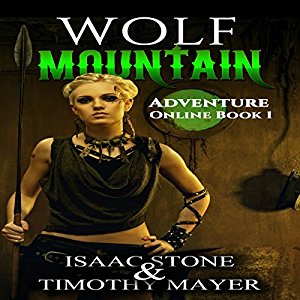 Vince is a down and out millennial with an advanced degree in Archaeology and an endless parade of dead end jobs. Crushed by student loan debt and bills he is barely making ends meet, and his one source of relief is gaming. Vince gets a mysterious job offer from a gaming company to be a beta tester for their new full immersion virtual reality system. He doesn't understand why they chose him over literally anyone else on the planet, and is suspicious that he got the offer on the same day he got fired, but he's flat broke. Besides, who wouldn't want to get paid to play?

Soon Vince finds himself taking the role of a treasure hunter immersed in a 1920's pulp adventure filled with deadly bootleggers, spooky caves, lost airships, and a beautiful spear hurling girl who was raised by wolves. It doesn't take long for Vince to realize something fishy is going on, and there's more to this game than meets the eye. He must make his way from plot cache to plot cache as he searches for lost jewels, the truth about the game, and enough ammunition to keep the tommy gun barking.

Vincent is fired from the dead end where he works. Soon after he gets a call from a gaming company offering him the job of his dreams: becoming virtual reality game tester. The game is set towards the end of the 1920s, and he will have to find some jewels lost in the middle of the woods where a plane belonging to a rich family crashed some years before.

First of all, this book is not exactly written as a LitRPG, even though it describes the actions of the characters in the game. This could make it more accessible for people not really into LitRPG.

I found the premies quite interesting, but the execution was poor. The book basically narrates how Vince is hired, his experience in the game and a twist at the end of the story. The adventures during the game were just okay, but not enough to really get me hooked to the story. It was entertaining, yet, but that’s it. I was expecting all the time for something to happen, like some serious issue related to the VR chamber.

This is one of those cases where I think the authors stretch a story over several volumes just for the sake of the sell. I think the story would really benefit from having this book just as an introduction to the real story: Vince gets hired, he plays the game, and then something happens. From there then I would develop the story, but keeping it in the same book, and shortening the gaming part considerably, since nothing important happens and the characters are quite plain. The important and disconcerting things happen outside the game, so I think the authors should have focused this book on that part.

The book is well written, so I was able to listen until the end, but what got me interested was that twist towards the end. It is a pity that the rest of the book did not get me interested enough, so I doubt I will continue this series.

J. Scott Bennett narration was great, as usual, and I think it was part of the reason why the gaming part was bearable. He has an ample range of voices and his character interpretations are very vivid. About the audio production, I noticed a couple of silences between paragraphs, but nothing disturbing.