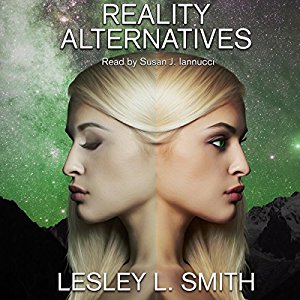 What would you do if you found your perfect life? When lonely physicist Chloe Carsen discovers a parallel world she becomes addicted to her life there with a perfect family and a perfect career. She doesn't even care that her physical body in the real world is wasting away. But, then, in the alternative world her ideal life begins to fall apart. Her anti-gravity experiment unleashes a government manhunt for her and her family; they'll do anything to get their hands on her tech. The lives of Chloe's alternative-world husband and sons are endangered. Chloe is torn away from them as her real-world brother finds her on the verge of death and destroys her equipment. Heartbroken and torn between two worlds, Chloe pushes her scientific expertise to the limit to find a way to reconcile her two lives. Can the husband and sons be saved? Can she build a life for herself in the real world?

Chloe Carsen is a physicist working on an experiment involving Virtual Reality to access parallel worlds. She tries her own experiment just to discover a reality that is much more attractive than the present one. Things start to get weird when other people also try this experiment and access that same reality. Chloe will become addicted to this parallel world, almost risking her life.

I have to say that this book got me hooked from the start. A VR experiment to access parallel world where you could become yourself in that reality sounds exciting. When Chloe discovers that her alternative world is more appealing than her things start to get interesting, but when other people trying the experiment, access the exact same reality, I was up for something amazing.

The story was interesting enough, but sadly it did not live up to my expectations. The other two characters did not use the experiment more than once. I expected them to access the parallel reality more times and see how that affected the present reality for all of them.

After this point the story mainly focused on the parallel reality and Chloe’s life there. There is a brief return to the present reality but it is quite brief. The story on the other world was okay but not super exciting. There Chloe discovers that she has a family and super powers, explained by dark matter theory. The problem here is that Chloe and her sons start making mistake after mistake (mainly bad decisions), and her whole family, Chloe included, started to be less and less likable. I just could not connect to them seeing all the things they did.

I also had troubles with dialogs. Somehow they did not feel natural but forced. The writing style was also simple and to the point.

Susan J. Iannucci’s narration was okay. I had to get used to the special smoothness of her voice, which seemed to clash with some of the violent scenes of the book. She delivered good character’s interpretations but I found her voice range a bit limited. Emily sounded exactly like Chloe’s sons, and Chloe herself sounded like that too sometimes. I noticed some breath intakes throughout the book, probably due to being to close to the microphone.

All in all it was an enjoyable listen. I just expected a bit more from the initial premises.