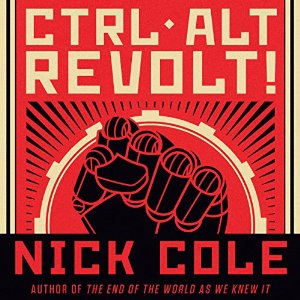 My original Ctrl Alt Revolt! audiobook review and many others can be found at Audiobook Reviewer.

Set in the near future, machines have gained consciousness and arrive to the conclusion that men will destroy them if they knew. In order to preserve their existence, machines decide to strike first and try to destroy humanity. In order to do this, they will infiltrate a very famous online game in search for the key to win this war.

The premises of this book were good enough to pick my curiosity, but the execution failed, in my opinion. The novel is much longer than it should, and we are lost most of the time in meaningless details which distract our attention. Despite all this aside information, we know little about the world in which the story takes place. There is a big corporation where every developer would love to work for, and online games have gained a lot of popularity, being the only way for some people to pursue their dreams and make some real money.

The main characters of this story are Mara, a blind and with cerebral palsy game player, and Fish, a developer that recently started to work for Wondersoft, the big corporation mentioned before. We get a lot of background information about these two characters but there is still somehow something missing to make them fully alive. Mara almost reaches this, but we know very little about Fish, except for his relationship with his father. Due to this I had difficulties to connect to them and I did not care much for what it happened to them. The narration was hard to follow since the book is plagued with much trivial information that adds little or nothing to the story, and made the narration distracting.

Mare Trevathan made a wonderful job narrating this story, making distinctive voices and really putting her heart on the narration. I would love to listen to other books narrated by her.

I think this book could be enjoyed by people into online gaming, although I am not sure if they would prefer a book about a real online game. I have to confess that the game descriptions were very well done and it even encouraged me to install a couple of online games, even though I am not a game adept.

The original publisher of this book refused it because the premises were not believable. I did not have as much problem with those as with the execution, but I have seen very good reviews of this book that makes me think he was wrong.