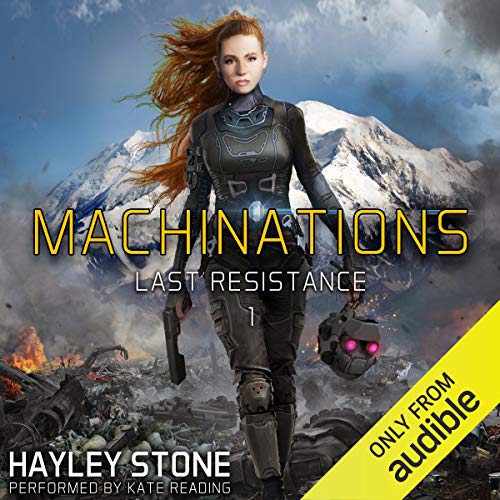 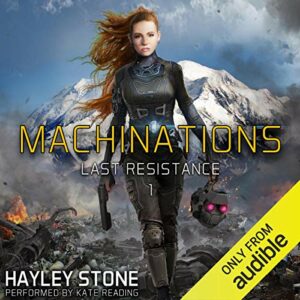 Waking up as a clone with a broken memory? Not great when you're leading the resistance.
Rhona has battled the malevolent A.I. intent on wiping out humanity since the first Machinations began—until she’s killed during a rescue mission gone wrong. Now, Rhona awakens to find herself transported to a new body, complete with her DNA and her personality.
She's a clone... of herself. Except for her missing memories. Some of which could potentially turn the tide of the war.
Trapped in the shadow of the life she knew and rejected by the man who once loved her, the reincarnated Rhona must fight to secure her place among old friends and newfound enemies—and quickly. For the machines are inching closer to exterminating humanity for good. And only Rhona, whoever she is now, can save them.
Experience the unforgettable start of the Last Resistance Series, a sci-fi thriller filled with heart, soul, and plenty of twists. Perfect for fans of Orphan Black, Westworld, Robopocalypse, and Terminator.

In a distant future, robots and A.I.’s, led by the Echelon, have turned themselves against humanity. Commander Rhona Long, a charismatic human leader, dies in battle in the arms of her lover, to return to life several months later as a clone in order to continue her mission against the machines as if nothing had happened. The world doesn’t know about Rhona’s death, so Rhona 2.0 will have to fill Rhona’s shoes to fight for humanity and try to gain her lover back, which just can’t accept this new version of her.

The long-time war between humanity and machines is not an original topic but the novelty here is that our hero is a clone, which in the eyes of some of her people is dubiously a human being, and therefore in some ways not compatible with their cause. Like that, it sounds like an interesting and controverted topic, which makes me think that this book could have been so much more, but sadly it wasn’t. Rhona spends most of the time pining for her lost love while trying to hide the fact that she’s a clone and doesn’t remember much of her past life. There is some action towards the end of the book, but for the most part, nothing of interest happens. The story drags while Rhona tries to gain his boyfriend back, while also plays with the idea of initiating a relationship with her friend Samuel. At some point, I was convinced there was some word count that stone needed to make in order to write out so many words to say nothing.  The love triangle subplot was quite predictable from the start. I just hated the situation Samuel’s put himself in. I just can’t stand characters without self-esteem that are continuously manipulated and abused by their best “friends”.

One of the main problems of this book is that we don’t really know Rhona. She dies at the beginning of the book, and while everyone talks about the awesome leader she was, it’s not something we can actually see. It could be that her clone lacked maturity due to many reasons but, I only saw an immature girl with some talent to improvise and good luck at the right moment. She was not a good strategist not savvy in a way that one would assume from the leader of humanity. Her complete ignorance of technology also didn’t make much sense. I get that she hated the machines, but you need to know your enemy to have a good chance of winning a war.

There are plenty of technical aspects that are mentioned but not developed enough. We know Rhona was cloned but we don’t know how and while things may have not gone as expected as Samuel mentions. The tension and intrigue built up the beginning worked well to get the readers hooked but Stone doesn’t deliver and it seems she didn’t have herself the answers to the many questions.

The Echelon is mentioned as the leaders of the Machinations, but we didn’t get any information about it. I would have appreciated some background information to avoid having the feeling that the author is just winging it. The machines are also not described apart from the fact that they whir all the time and have red eyes. I think they might be some kind of Terminator. I think that not showing them was intended as the suggestion can be scarier than the thing itself but after a while, you need to show something if you’re writing about direct confrontations.

When I was finishing the book I thought the story would have worked much better were this the second book in a series. I think we needed a whole book to know and fall in love with Rhona, so that we could grieve her loss and then relate to her clone and the sense of loss, but that would have been a completely different book. Having less romance and more world-building would have created a more interesting story for me personally.

I thoroughly enjoyed Kate Reading’s narration, and I think it’s the only reason why I was able to finish this book. She did a wonderful job voicing all the characters and bringing them to life. Her speech is clear and her character interpretations are spot-on.