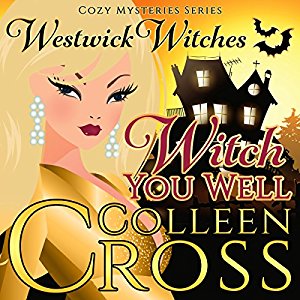 Cen is a journalist descended from a long line of powerful witches who have inhabited the small town of Westwick Corners for generations. Except, Cen is a witch who craves an ordinary life, and as the family black sheep, she doesn’t even want to dabble in the craft. . . much to her troublemaking Aunt Pearl’s dismay.

Then days before Cen’s wedding to a “normal” guy, a visiting billionaire is murdered at her family’s cozy inn--and now all evidence points to her eccentric Aunt Pearl. If Cen hopes to prove her aunt’s innocence, she will have to embrace her own magic and do a little sleuthing. Yet her investigation only uncovers more questions than answers after she discovers a supernatural connection to the murder, a strange vortex beneath the town, and a disturbing secret about her gorgeous fiancée.

For help she turns to the town’s sexy new sheriff, Tyler Gates. But working with him only adds more complications to her already harried life once Cen starts feeling an overwhelming attraction to the no-nonsense man.

But are her feelings for Tyler real, or just the result of pre-wedding jitters? Cen will have to find out! And will the two of them be able to get past their personal baggage to solve the case in time to save her aunt?

Buy your copy today to find out!

Witch You Well is the first novel in the Westwick Witches Cozy Mysteries series chock-full of cozy mystery and supernatural romantic suspense! Sign up for Colleen's new release newsletter at www.colleencross.com to get the latest on new books in the series.

Cendrine belongs to a family of witches. It is not something publicly discussed in the little town of Westwick, but not entirely a secret either. Cendrine is attending her wedding rehearsal at her family’s inn, when they find a corpse at the gazebo where the wedding was going to take place. There is a new sheriff in town, but finding the murderer will be much easier by using some magic, so Cendrine will be doing some sleuthing with the help of some of her family members.

I was looking forward to this book. Urban fantasy and cozy mystery together is something that we do not see everyday, and it is a great combination for a pick me up, at least for me. This story has great and charismatic characters, like aunt Pearl. I really liked this character and the situations she created. There were some hilarious moments that made my day.

Although Cendrine is the main character in the book, there was something missing that made her distinguishable. I think it was a good idea to have aunt Pearl and other characters as sidekicks to make the story work in a better way.

It is not a long book, just under six hours, and the story kept my attention from beginning to end. This makes it ideal for lazy days or when someone doesn’t feel like committing to a longer or deeper book. It was a light, easy, and relaxing listen.

Petrea Burchard did a very good job narrating this book. Checking audible I only see this title narrated by her, and I have to say that she did extremely well. The audio production was good, and her voice range and interpretation skills were impressive. I just found Cendrine’s interpretation a bit on the dull side, but this matches my perception of Cendrine’s personality, so it could have been intended. I think some parts required a more lively narration, but this is just my personal opinion.

I really enjoyed this book, and I think it would delight both urban fantasy and cozy mystery fans. I am looking forward to the sequel.