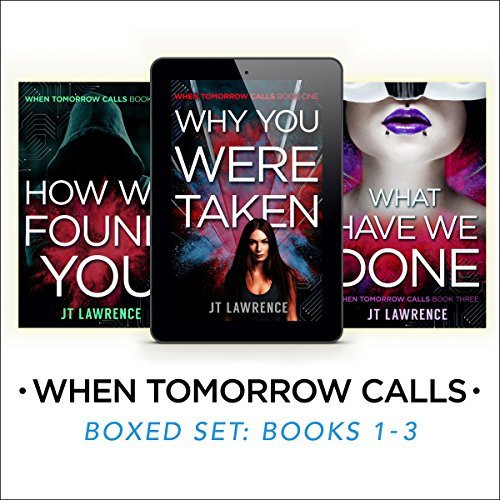 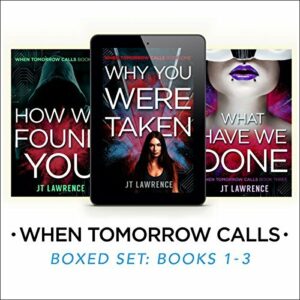 When Tomorrow Calls: The Complete Boxed Set is now available - don't blink, or you'll miss it.

Why You Were Taken (Audiobook 1): Imagine discovering your murdered parents were really your abductors. Then you find out you're on the hit list, too. In tomorrow's world, a troubled woman approaches Kirsten with a warning and a wafer key and is later found dead. Was she just another victim of the suicide contagion, or is there something more sinister at play? The key leads Kirsten on a chase to the doomsday seed vault and a hit list of seven people - and her barcode is on it.

How We Found You (Audiobook 2): Would you sacrifice your son to save your daughter? There's something different about Kate's four-year-old son. He wasn't created the old-fashioned way. Now a violent cult wants him dead and Kate will do anything to protect him - until they take her daughter. Who will she choose to live, and who will she have to sacrifice? Glimpse JT Lawrence's chilling vision of the all-too-near future in this dark psychological thriller with a twist that will send you reeling. How We Found You is the second audiobook in the riveting series When Tomorrow Calls.

What Have We Done (Audiobook 3): In tomorrow's world, where the edges blur between addictive virtual reality and real life, would you hurt your daughter if it was the only way to set her free? Cyberpunk meets the robopocalypse on the edge of litRPG in this dark dystopian thriller. Jack in and get ready for your head to explode with this third audiobook in the riveting series When Tomorrow Calls. Ready? Your next addiction starts now.

Set in the year 2021, Johannesburg is a swarm of different cultures and a conflicted city. Apart from the racist and social issues, for an unknown reason, Johannesburg has one of the highest rates of infertility in the world. Kristen is a very special person, synaesthete and very sensitive, she tries to fill the black hole she always had feels inside. One day she meets a strange woman who tells her that she is not who she think she is, and that she was taken, and now they will be hunting her.

The first book in the trilogy is a roller coaster of emotions and events, an action packed story of two very special people who don’t know who they are, but along the way of finding about themselves, they unearth an intricate clandestine operation of enormous proportions. This was a book that I couldn’t put down. The characters are wonderfully built, feeling like real people.

Some of the things that hooked me were the intrigue and the tension, and guessing where the story was going to. We follow the two main characters that seem completely unrelated, and little by little the pieces start falling into place. Alternating with the main story are diary entries from several years before. Af first they are not explained nor the author of the entries revealed, but after a while one can start guessing who that person can be.

After the evens in the previous book, Kate tries to rebuild her life with two toddlers and her twin Seth. She is having a very difficult time due to PSTD and constant paranoia. Her fears seem to ring true when someone tries to kidnap her son Mally.

We find a different Kate than before, with more experience and more fears, but also unresolved issues. Lawrence has a very powerful way of transmitting the characters’ emotions, and this made easy to connect to them, especially Kate, even though our lives and circumstances are quite different. Her fear and anxiety are palpable through Lawrence’s words in a way that they become ours too. It’s amazing how little details help to bring the characters to life, and Lawrence is great at this. All characters are alive, even though we don’t know a lot about their background.

There is a lot of action again in this book, and also dire situations that made me hurt for some of the characters. Some events made me think a lot, wondering what I’d do if I was in the same situation; and there was not an easy answer. Some images really stayed with me after finishing the book, and I already miss the characters in it. This series is my favorite so far this year.

On the third book Kate lives a normalish life along her children, who are almost grownups now. Silver is a game junkie to the point that it worries Kate, and Mally has a robot girlfriend. One day, Silver doesn’t come back home, and it seems all machines are rebelling against humanity.

This book goes into a quite different direction than the previous ones, but it was somehow expected since it picks up the story twelve years later. The world building is again amazing, with vivid descriptions and details that make me want to be there just to see it all. Cyberpunk is one of my favorite genres, but J.T. Lawrence takes it to the next level. There were many surprises in this book, which I found totally mind-blowing. It was one of those books that I couldn’t put down.

It was a beautifully written trilogy, full with details but without overloading the reader and letting some things to the imagination. There is plenty of technology in the book, but it is just mentioned as a part of the world building. The series feels part dystopia, part cyberpunk.

Roshina Ratnam’s narration was simply beautiful. I could listen to her voice for hours on end. She brought the characters to life and delivered great and expressive character’s interpretations. One minor setback is that many of the characters sounded exactly the same, causing some of dialogs therefore confusing.

I LOVED this series, and would recommend it not only to people into cyberpunk, but also to anyone who would like to read a good story with great characters. J.T. Lawrence has become one of my favorite authors, and I will read anything she decides to delight us with.