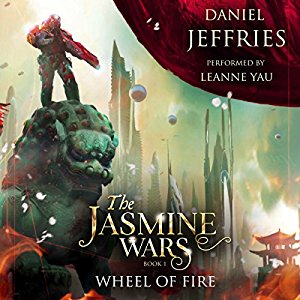 Experience the beginning of the epic saga of family, love and war.

Across a century of chaos and upheaval, follow three generations of heroes who will change the face of China forever.

When a Jasmine Revolution sweeps away the brutal Communist regime, China transforms into the world’s first AI-driven Direct Democracy, ushering in a golden age of peace and prosperity. From the earliest days of revolutionary fervor to the turbulence of war and rebellion, the powerful Zhang family is at the center of the storm. Nowt when protests and terrorism bring ultra-nationalism storming back, the nation’s favorite son, Colonel Ju-Long, must uncover the traitors in his midst before his beloved country explodes into another civil war.

But will long-buried family secrets mean it’s already too late?

This is a dystopia set in China. The story switches from the year 2086 and 2174, and it is mostly about the political changes that happened in 2136, when the country switched from Communism to Democracy. The story focuses on the family of a boy who survived during the hard Communism years, when his parents and brothers were killed by the government, and which will be key in the future years of Democracy. China becomes a world power regarding AI and technological advances, but there is a hoard of nationalists which will put this peaceful and prosper situation in danger.

This book seemed so interesting that I was looking forward to listen to it. But I have to say that I struggled so much to finish it that I am not sure the effort was worth it. It is not an easy book to follow, not really due to the time shifts or the many characters with Chinese names, but due to how little information we get about them. The listener is thrown dozens of character’s names with little explanation or background. I had to keep a list to be able to follow the flow, and even like that it was a challenge.

One of the worst issues with this book is the narration. Leanne Yau reads fast, without much pause and little inflection. I tend to listen to books at more than 1X speed to prevent my mind from wandering, but here even at 1X I had the feeling I was missing things. Apart from fast and having a heavy Asian accent, Yau has a very clipped speech. To make things worse, the audio production was subpar. There is some background noise all the time, and this coupled with the clipped speech made impossible to listen to the book in noisy environments. The great things about audiobooks is the possibility they bring to multitask, but with this one it was difficult. I had to pause it while on the metro because I was not able to hear everything correctly. I noticed some little reverb on the narration, which makes me think that Yau’s narration booth needs some improvement. She used some echo effect to express characters’ thoughts that was way to overdone and broke the rhythm of the story. There were also some important differences in volume, sibilances and pop sounds.

I liked the idea of having a narrator of Asian origin to set the atmosphere like with The Burn Zone, but this time it did not work. I wish the best to Leanne Yau, but I would recommend her to invest on improving her performance, booth, and technical skills.

I got quite upset about this book. This was the kind of story that I most enjoy, and within one of my favorite genre. It also felt quite original and I was ready to enjoy the ride. But, for the life of me, I couldn’t. It makes me quite sad, because I would like to continue this series but I do not have the time to read regular books nowadays, but I just can’t stand how this narration was done. If another audio edition gets released in the future I will definitely go for it.