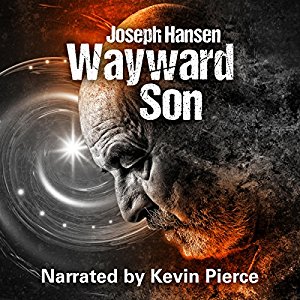 "His perfect life in its late autumn years, Bob Johnson is offered the chance of using a prototype technology to traverse gateways into alternate realities. A chance to change the course of history and possibly the nature of certain people. Bob seizes the opportunity to rescue his soul…and get revenge on those who are trying ruin everything he cherishes. His reality will never be the same again… Wayward Son is a fast paced time travel thriller.

Bob is in the last years of his life. He is offered to work on a secret project that involves traveling to alternate realities, not for him but for criminals, with the intention of changing their perception of life and maybe make new people from them.

I found this idea very interesting. Getting a couple of thugs to travel to other realities, becoming someone else and affront different difficulties. But it was something that somehow did not completely work for me. The stories were interesting enough but they felt like a compendium of short stories, where there was a clear lack of depth in the characters.

There is more focus on one of the thugs, the one which gets to evolve due to this experiment. We hear less from the other one, which remains the same and appears as pure evil, with no depth whatsoever.

Something that disappoint me a bit was the fact that the book kept me expecting something more almost until the end. At some point Bob seems to be receiving messages from aliens, and I expected that part to develop in a different and more interesting way.

I think what I did not like from this book is that it seems just an attempt to proselytize. I guess Hansen wanted to show the difference in nature and nurture, but the result came just too moralizing for me and with little else.

Kevin Pierce’s narration was great, as usual, giving an extra depth to Bob’s personality, and setting the right atmosphere for the story. The audio production was spotless.

I enjoyed the book, but I felt something missing to make it great. It showed a mere experiment in which not everyone would agree about the outcome. I am also a bit tired of reading books where Muslims are the bad guys.