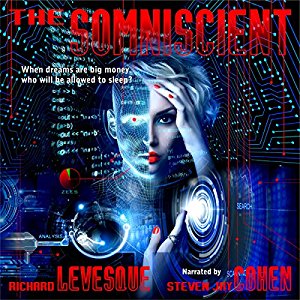 The story takes place in a near future. Money has been vanquished and people are paid in “z’s”, being one Z equivalent to one hour of sleep. “Z’s” are not only needed to pay all the essentials in life but also sleep time. Workers are sleep deprived and see how their credits decrease with any little action on their part. Some need to work harder without enough sleep just to be able to earn a couple of hours of rest. Switching from money to “z’s” was initially done to give people more freedom but in the end they just became slaves.

Our phones and digital feed are substituted by the Crawl and head implants which provide a digital interface with the world. This technology made possible for people to share their dreams, and Enlightenment has the monopoly to sell them. There are some clandestine dreams, being the most notorious the ones produced by the called Somniscient, somebody that Enlightment would like to catch. Nix Nighthawk, an average programmer, gets accidentally involved in it, risking his life for something he does not even know. But there will be surprises for everybody in this book.

I loved the premises of this book. I have a soft spot for dystopian societies, and thinking how possible would be for ours to become something like that. They are social experiments, and I love it. I really enjoyed the descriptions of the technology in this world, and how people made use of it. In a way I found it similar to the use we give to our smartphones nowadays, but without the need of carrying and holding a device. I found weird though, the evolution of offices, with no desks in them, but I guess that since nobody had enough “z’s” for any luxuries, and they did not need a desk, why bother with it.

I liked the characters in the book, but I would have appreciated to know a bit more about them. Each of them was correctly presented, but then things changed fast for us to be able to know more of them. This made it a bit difficult to connect to any of them. With the one we spend most time was Tabby, but her complacent nature prevented me from getting too attached to her.

There were several twists in this book, some expected, others not, but the whole story was greatly enjoyable, even though I am not 100% convinced about the end of the book. I just want to believe that there are many positive aspects in technology, but this story tells us that even though this is true, mankind is just too greedy to avoid spoiling it in the end. This is maybe why, even though I really liked this book, it left me with a bit of a bittersweet aftertaste.

Steven Jay Cohen did a good job transmitting the characters’ emotions, their desperation. I found the narration though, a bit monotone, and I think the intelligibility and clarity could have been improved in postproduction. I just found it a bit dull and would have appreciated it to be a bit ‘brighter’. For the rest, I found no issues or artifacts. It was a job well done.

I am very happy that Cohen has offered me this book, since I did not know about its existence, and now in hindsight I know I would have missed a masterpiece, which I consider at the same level as ‘Brave New World’ or ‘Neuromancer’.