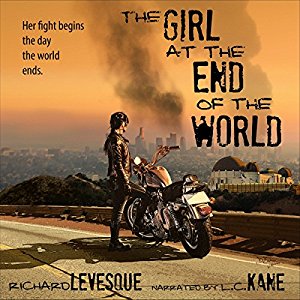 The world as she knew it ended when Scarlett Fischer turned fifteen. A mysterious fungus started spreading rapidly among the world population, killing most of it in mere hours. Scarlett is somehow immune to the fungus, and she survives in a city full of corpses. She decides to make the best of it until she finds that she is not the only survivor in the area, and some people are not friendly when they are against dire circumstances.

This was a book I really enjoyed. It was not only the theme, which I usually like, but I was able to relate to Scarlett and her worries about the plague. Richard Levesque is well know for his well constructed stories and his well developed characters, and this book is no exception. We accompanied Scarlett in her odyssey and it made me feel that I was her at times. Even though the development of the story was not very original, it was not what I expected, and I would have liked to know more about the origin of the fungus.

There were though some unrealistic aspects. First, I do not believe that a fifteen year old girl will convince her mother to leave her behind when not absolutely certain that everything is lost. I just cannot see this happening. Second, Scarlett mentions that she learned to ride motorbikes on Youtube, which sounds not impossible but undoubtedly far fetched. I took my riding exam last year and if you have no experience, it can be quite hard. Also, it is very normal for the beginner rider to drop their bike by accident (it happened to me more times than I want to admit) and unless you are super strong, it is almost impossible to set it straight again. Scarlett’s bike is a light one (from the description – a little Honda -), probably very similar to my Honda CB 250, and let me tell you than I am not able to set it straight by myself once it has fell or it is starting to fall.

There was a detail that got me thinking for a while. Is it possible to have immunity against a fungus? And is it possible that 99% of the human population dies from it but it does not affect any animals? Being the author I would have chosen a virus, since there are few documented cases about crossing the species barrier, and fungus is usually not species specific (it does not need to bond to a DNA chain). I am not an expert in biology so I might be wrong, but from what I have read I would have chosen a virus.

L.C. Kane was perfect for the story. The book is written in first person, and Kane’s sweet voice was just right for Scarlett. She also interpreted the other character’s well, but there were two issues. The Australian accent was not very well done, and the Spanish words were not correctly pronounced. Some were not even correct, but that was up to Levesque. Why should somebody use the infinitive to issue a command? This might have been overlooked by most but not by the ones with a basic knowledge of the Spanish grammar. I just hate when this happens, being really easy nowadays to double check if an expression in another language is correct.

All in all I really liked the book, and despite the few noted issues, it is very well written and greatly enjoyable. I would read anything by Levesque at any moment.

On a personal note, I really enjoyed the part where Scarlett was riding her little Honda. So much that I decided to dust mine off and go for a ride myself.