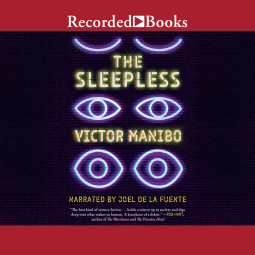 Journalist Jamie Vega is Sleepless: he can’t sleep, nor does he need to. When his boss dies on the eve of a controversial corporate takeover, Jamie doesn’t buy the too-convenient explanation of suicide, and launches an investigation of his own.
But everything goes awry when Jamie discovers that he was the last person who saw Simon alive. Not only do the police suspect him, Jamie himself has no memory of that night. Alarmingly, his memory loss may have to do with how he became Sleepless: not naturally, like other Sleepless people, but through a risky and illegal biohacking process.
As Jamie delves deeper into Simon’s final days, he tangles with extremist organizations and powerful corporate interests, all while confronting past traumas and unforeseen consequences of his medical experimentation. But Jamie soon faces the most dangerous decision of all as he uncovers a terrifying truth about Sleeplessness that imperils him—and all of humanity.

Twenty-five percent of the world’s population is sleepless. No one knows what caused this epidemic, that began ten years prior. There seem to be no side effects to the condition, and the sleepless’ lives only change is more time to be productive, work more, learn new things, accomplish more. There’s an underside to the pandemic, and it’s that the world’s resources are running out at a faster pace than before. Because a quarter of the world population never sleeps.

Journalist Jamie, who’s been sleepless for a while, is the first person to find his boss dead at his desk. The evidence suggests suicide, but Jamie believes there’s more to it, and sets to uncover the truth about what happened to Simon.

This was a riveting tale where Jamie had to find out how Simon died, and whether someone was behind it. It was also a noir cyberpunk political thriller about a pandemic, drugs, and corruption. The world-building was really good, and action was interlaced with paragraphs of info dumping. I usually enjoy a well-built background and plenty of details, so this was a plus for me but it might not be for everyone. I found the plot interesting with a well-crafted intrigue, but the second half of the book felt a bit disjointed and my interest waned a bit. I wished the characters were more developed, perhaps that would have better held my interest. A couple of key characters were introduced in the second half but I was a bit lost about who they were and their relationship with Jamie. I think a bit more work on the characters would have prevented this.

There are well-known side effects of insomnia, which were not mentioned until halfway through the book, something I found strange, as Manibo must have done some research to write this book. It turned out, these side-effects I was missing, were a key part of the plot, so before things began to be revealed, I already know where the story was going. This didn’t deter me from enjoying a most entertaining and intriguing book, but it stroke me as odd that there weren’t more public studies about the condition when twenty-five percent of the world’s population was suffering from it.

Joel de la Fuente delivered a solid narration. With a pleasant tone and good rhythm, de la Fuente brought Jamie to life in this technothriller. The only two small setbacks were his female voices, which sounded similar to Jamie’s, making some dialogs confusing; and a lack of expression at certain times. I just would have expected a stronger reaction at some key moments.

All in all, it was an enjoyable audiobook that I’d recommend to anyone interested in a murder mystery in a highly technological society.

My thanks to Netgalley for a copy of this audiobook. This does not affect my opinion of the book or the content of my review.