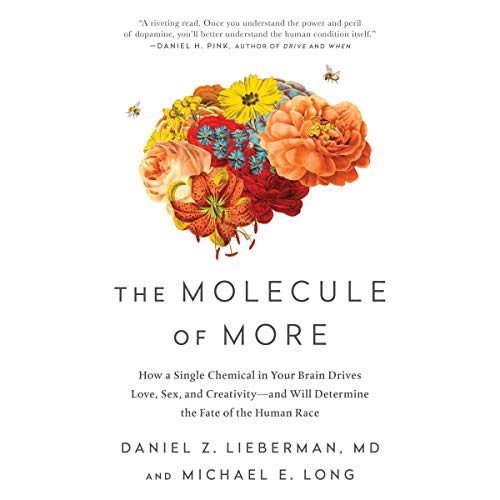 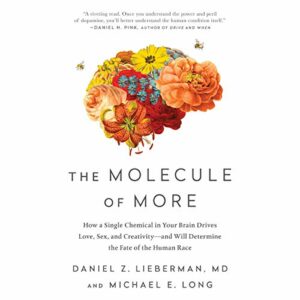 The Molecule of More: How a Single Chemical in Your Brain Drives Love, Sex, and Creativity—and Will Determine the Fate of the Human Race by Daniel Z. Lieberman, Michael E. Long
on October 2, 2018
Genres: Non-Fiction, Science
Format: eBook
Source: Libby
Goodreads
Overal Rating:

Why are we obsessed with the things we want only to be bored when we get them?

Why is addiction perfectly logical to an addict?

Why does love change so quickly from passion to indifference?

Why are some people die-hard liberals and others hardcore conservatives?

Why are we always hopeful for solutions even in the darkest times—and so good at figuring them out?

The answer is found in a single chemical in your brain: dopamine. Dopamine ensured the survival of early man. Thousands of years later, it is the source of our most basic behaviors and cultural ideas—and progress itself.
Dopamine is the chemical of desire that always asks for more—more stuff, more stimulation, and more surprises. In pursuit of these things, it is undeterred by emotion, fear, or morality. Dopamine is the source of our every urge, that little bit of biology that makes an ambitious business professional sacrifice everything in pursuit of success, or that drives a satisfied spouse to risk it all for the thrill of someone new. Simply put, it is why we seek and succeed; it is why we discover and prosper. Yet, at the same time, it’s why we gamble and squander.
From dopamine’s point of view, it’s not the having that matters. It’s getting something—anything—that’s new. From this understanding—the difference between possessing something versus anticipating it—we can understand in a revolutionary new way why we behave as we do in love, business, addiction, politics, religion—and we can even predict those behaviors in ourselves and others.
In The Molecule of More: How a Single Chemical in Your Brain Drives Love, Sex, and Creativity—and will Determine the Fate of the Human Race, George Washington University professor and psychiatrist Daniel Z. Lieberman, MD, and Georgetown University lecturer Michael E. Long present a potentially life-changing proposal: Much of human life has an unconsidered component that explains an array of behaviors previously thought to be unrelated, including why winners cheat, why geniuses often suffer with mental illness, why nearly all diets fail, and why the brains of liberals and conservatives really are different.

I like to pair my fiction reading with some non-fiction from time to time, and learning how the brain and work is one of my favorite things. This book is mostly about dopamine, and how its levels can influence our lives. I found the beginning quite illustrative, as it explains the difference between dopamine and serotonin. Funny fact, many of the manifestations we attribute to serotonin are caused by dopamine. Dopamine is the molecule that makes us want more, to look forward to the future, to get up from our chair and do things; while serotonin is, as the book describes it, a “here and now” neurotransmitter, one that allows us to enjoy things that are in front of us and in direct connection with our senses.

The rest of the book showcases some experiments and conclusions with which you may agree or not. Personally, I’m taking them with a grain of salt, as most of them are performed in mice, and the sample size is not large extract to infer strong conclusions. Some mental illnesses are described as related to abnormal dopamine levels, giving some examples of famous people.

There are two chapters that are mostly aimed at Americans. The first is about politics and how dopamine levels may incline one’s beliefs to the left or right. First, left or right are not exactly the same in every culture, being liberal associated with the left in some countries, and with the right in others. I mostly skimmed through this chapter as it was not relevant to my corner of the world.

The second chapter aimed mainly at Americans is about how immigrants have higher levels of dopamine than average. The scale used to study this was the number of bipolar people in the American society compared to other countries. While this may have some validity, as bipolar people have higher dopamine levels than average, I’m not sure the extrapolation made by the authors would be accurate.

One of the last chapters was so terribly sexist that made me drop the rating of this book from three to two stars. Higher levels of dopamine are a byproduct of our society, in which we don’t have to struggle to survive, but we get instead trapped in the latest technology and social media. Apparently, one of the problems for women with too much dopamine is that we don’t want to have children because we’re too focused on improving our selfish lives. After reading these affirmations, I double-checked and was right in my initial guess that the authors of this book were both males. Shame on them. I wonder why the authors didn’t think that maybe the world was already overpopulated and avoiding bringing children to this shitshow was in fact, a selfless act from some of us. In my view of things, having children is what is selfish, as it fulfills a bodily need that is, in many cases, out of control. There are also many women without the required stability to have children, but maybe living in the here and now, and just procreating like rabbits is preferable for Lieberman and Long.

Would I recommend this book? Yes and no. I found the first part interesting, but that information can be also found on the internet. The rest of the book is just anecdotic, and the part about women is just plain sexist.