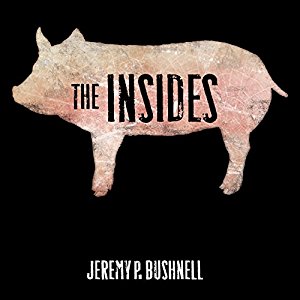 My original The Insides audiobook review and many others can be found at Audiobook Reviewer.

Ollie Krueger discovers magic when she is eighteen, and she sees people using magic to go to a place called ‘the Inside’. She was never able to go there because she was just learning, and only the ones opening the rift were allowed to pass to the other side. Time goes by, and Ollie gets married, has a child and stops practicing magic. Things get complicated, and she leaves home and gets a job as a butcher at the Carnage, a high end restaurant. There she will compete with her colleague Guyrichardson about who will work faster. Ollie is an excellent butcher, but Guyricharson has a special knife. So special that Ollie will start practicing magic again, and will have to escape from a villain called ‘Pig’, and Maja, a psychic specialized in finding things.

I did not know what to expect from this book, but let me tell you that it is a weird story. Weird does not mean bad, but you will need to keep an open mind for this one. There are strange elements and characters with unexpected motivations. Ollie is not even a likable character, and she makes quite some bad decisions, but she and her friend Victor feel real people. I think the weirdness of the characters is what made them interesting. I wish the author would have explored more this.

There is also Maja’s story, underdeveloped, in my opinion. I have the impression that there were too many storylines in this book and Bushnell failed at tying them together. There is also the subject of ‘the Inside’ that was not completely explained, and the open end, that I always feel like an easy way out.

I think the concept was great and original, but it could have been much better exploited and developed. I enjoyed the book but it left me with the feeling of expecting more.

The narration was ace. R.C. Bray was my first narrator, and he is still one of my favorites. He juggles voices and accents in a way that makes it sound easy. Bray is a five star narrator.

I enjoyed this book, and would recommend it to anyone who would like to listen to something different. I would have liked to learn more about ‘the Inside’ and the character’s decisions, but by the way this book was written, it does not look like the author will expand on it.