Posted May 25, 2019 by lomeraniel in Audiobooks, Cyberpunk, Review, Science-Fiction / 0 Comments 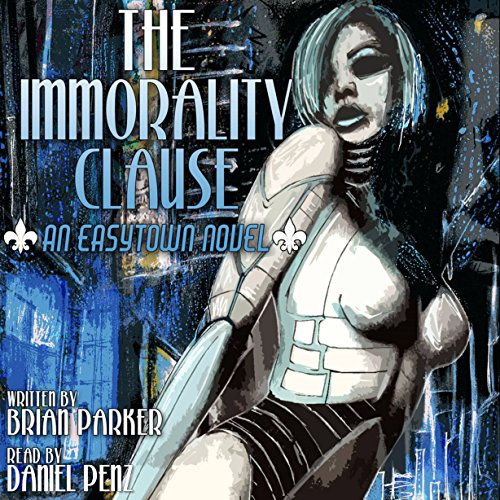 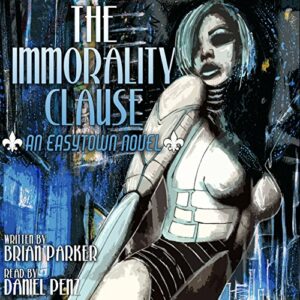 Easytown’s robotic pleasure clubs are a serial killer’s playground.
The futuristic slum in eastern New Orleans is a violent place where any vice can be satisfied—for a price. As long as the taxes are paid and tourists continue to flock to the city, businesses are allowed to operate as they see fit. But a string of violent murders threatens to upset the delicate balance between pleasure and safety.
As homicide detective Zach Forrest tries to unravel the mystery and prevent the next murder, he embarks on a mind-bending investigation that will change his perception of reality forever.

Zach Forrester is the cop in charge of investigating the still unresolved murders that are taking place in Easytown, the red-light district of a futuristic New Orleans. The only common point is that they are all occurring to clients in brothels of the area, in which services are provided by sex robots. Zach has never liked that kind of technology but this time he must remain closer to it in order to find the serial killer.

The setting of this novel and the characters reminded me a lot of Blade Runner, and maybe because of that, I found some parts a bit predictable. This did not deter me from fully enjoying this noir cyberpunk audiobook, which absorbed me in a way that few books do. I found myself taking long walks in the park just to keep listening and finding out what came next. The characters are well built, and the world had a decadent charm that drew me in like a moth to a flame.

Even though Zack and his virtual assistant felt a bit archetypal, I really liked their relationship and dynamics. I had more issues liking the brothel manager, but this may have to do with the fact that I suspected quite soon what was going on. Even like that,~ there were plenty of twists on the second half to keep me entertained and on the edge of my seat. This is definitely a book I would recommend to fans of the genre.

Daniel Penz’s narration was excellent, and he really became Zach in this story, transmitting his emotions and moods. He used subtle sound effects for some of the bots and phone calls, which helped to enhance the futuristic atmosphere. His female voices were also quite good, even though I don’t know if it was because Andi sounds like Andy, that I kept thinking that Zach’s assistant was a young man while knowing that she had a female personality. I noted some light volume changes throughout the book, and the sound effects parts were lower than the rest, which make listening to a bit trickier. I had to up the volume a bit, especially when I was listening on the street.

Again, this was quite an exciting ride, and I am looking forward to the next book in the series.