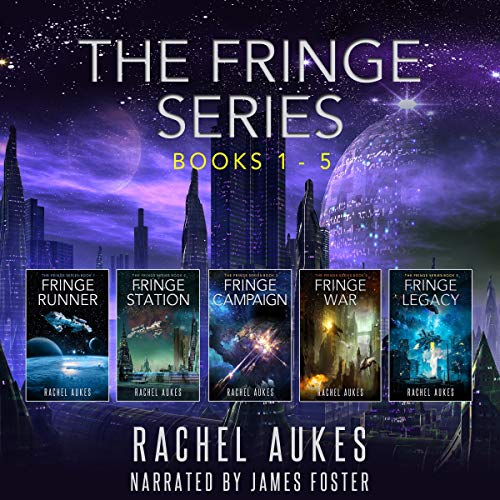 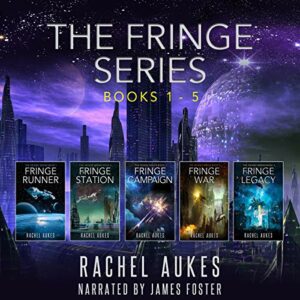 The first five thrilling novels in the Fringe Series are now available in a convenient ebook bundle! Featuring galactic conspiracies, epic interstellar missions, and three rebel captains at the front of an interplanetary war, this explosive collection includes the following titles:FRINGE RUNNERFRINGE STATIONFRINGE CAMPAIGNFRINGE WARFRINGE LEGACYAnd the bonus short story, “The Teardrop that became a Torrent”
War looms on the horizon… After the colonization of Mars and Europa, it took us fewer than five generations to reach beyond our solar system and discover new planets capable of supporting human life. Too far away to be governed under Earth law, the Collective was formed. Several hundred years later, the Collective has expanded to a system of six worlds. Power struggles and unequal rights have made interplanetary war all but inevitable. With rebellions arising across the Collective, three captains launch near-suicidal missions to free the oppressed fringe and reset equality across the stars.
A galactic war is coming, and only an old mail runner, a space pirate, and their ragtag crews can prevent it.

The human race has expanded their horizons and now their destiny is tied to six planets far from the Solar System. They are governed by The Collective, but only people from two of the six worlds are considered citizens. The colonists, who live in the other four planets are forced to pay high taxes to the Collective, while people on the main two planets live the good life.

This is the story of an old captain and his crew, who survived the old war, and get the wheels in motion to start a new revolution, perhaps giving a fair chance to the colonists.

I thoroughly enjoyed this series, which reminded me a lot of Firefly. I especially liked the political intrigues, the conspiracies, and the newly formed alliances. I think the cast of characters was also quite interesting, each one with their particular baggage.

There are five books in the series, and I enjoyed some more than others. It took me quite some to get into the story, and I think it was mainly due to the lack of descriptions. I think knowing more about the scenes and the characters would have helped me to get hooked more quickly. For instance, we know little about the characters’ appearance. We know that the captain may be old because we read again and again about the pain in his joins, but we only get to know his age in the third book. It is the same with the rest. One of the characters is in a wheelchair, and another one has terrible scars on his face, but we don’t know a lot about how any of the characters should look like. I don’t really need a lot of information, I know readers need to exercise their imagination, but I could have done with a couple of clear characteristics about each character to file them separately in my mind. It happened the same with places, situations, and actions. I think I needed to ‘see’ more clearly how things were and what was happening.

Probably because of this, I felt detached from the characters and events. There were situations of enormous emotion, but for the life of me, I could not feel it. I felt the rhythm a bit slow on occasions. I enjoyed the story, it was entertaining, but I did not find it gripping.

James Anderson Foster’s narration was excellent. This is the second time I have the pleasure of listening to a book narrated by Foster, and he does a wonderful job interpreting the characters and using a compelling tone to keep the listener interested. Subtle variations helped to differentiate characters, and all in all, the narration improved the whole experience.

I would recommend this series to anyone into the genre, and also people nostalgic about Firefly. The worldbuilding was good but the story was not very original. Still a decent read.