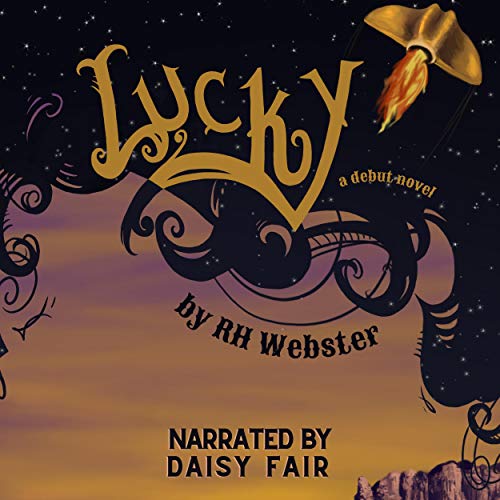 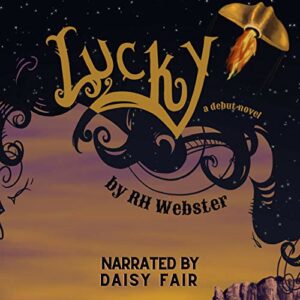 Life in the space lanes isn't the easiest, but for Trigg Donner, commander of the space freighter Rosebud, it's more than a steady paycheck--it's home. But when a routine landing on San Pedro unearths a mystery simmering on his own ship, Trigg comes face to face with his own fears and distrust.
After spending several years stranded on a distant mining colony, former graduate student Cassandra "Lucky" Luckenbach finally has enough money saved up to catch a spaceship back home to Earth. She boards the Rosebud unaware that she is walking into the middle of a life-altering interstellar conspiracy. Mystery, adventure, and romance await her on the flight home. Before she arrives on Earth, she will be forced to ask herself what it is that she really wants, and who she wants to be.

Lucky starts as a space opera western. A man from the Rosebud crew is killed on a planet, and his job needs to be fulfilled by one of the passengers. Cassandra Luckenbach, Lucky, offers her assistance and she gets a temporary job among the crew. The spaceship continues its voyage, amidst very strange phenomena like issues with the gravity plates and lost objects.

I found this a pleasant and light reading, but the story turned quite fast into a romance novella set in a spaceship, which is not my cup of tea. I don’t mind romance in a book but when it becomes the main topic, I tend to lose interest. Here the romance came down pretty fast, even before we knew the characters well, and also before they really knew each other. Losing each other in the other’s eyes just after they met is not a realistic way of beginning a durable relationship in my opinion. There’s a mystery subplot that I would have liked the story focused on, but it was so underdeveloped that it was difficult to get invested in it.

We don’t know much about the crew of the Rosebud, and I’m not even sure we’ve met all of them. I think more character development would have helped in the mystery subplot to get the reader more engaged. I found the crew to be a more homogeneous bunch than in similar books of the genre, even more homogeneous than the current population of the United States. There’s little world-building, that could have helped to give depth to this story, and maybe open the door to a sequel. The Rosebud is a transport ship between colonies, but apart from poor conditions and totalitarian regimes in some of them, we know nothing about how humanity has reached this point in history. There’s also a general lack of technology description, apart from a mention about how spaceships take off, and something about the gravity plaks, but nothing about the speeds a ship as the Rosebud can reach.

I can’t say if we have met all crewmembers of the Rosebud, as this was not explicitly mentioned. I was also confused about the figure of the commander and why it was different than the captain, especially as the Rosebud seemed to be a civilian vessel. The commander’s responsibilities are not mentioned at any point, and the captain barely makes an appearance in the book, so I think as a writer I’ve focused more on delineating the characters better and maybe blending two into one like in this case.

I was bothered by how much the commander and Lucky ground their mollars. This was also mentioned using different words, but this exact expression appears so many times in the book that I had the urge of going back and counting them all to check if they were more than ten.

Daisy Fair delivered a pleasant narration but I observed some small issues that we often see in not very experienced narrators. In general, Fair did a good job at giving each character a distinctive voice and style, but in some voices sounded quite similar, which made following dialogs a bit difficult. I’ve also noticed a couple of times that Fair didn’t change her tone to show the difference between a narrative paragraph and words said by a character, using the character’s voice for the narrative part. Something that bothered me a bit, especially at the beginning, is that some of the characters’ interactions with Lucky were described as kind and cordial, but most of the time they sounded dry and even annoyed. The audio production was correct and there were no audible issues with it.