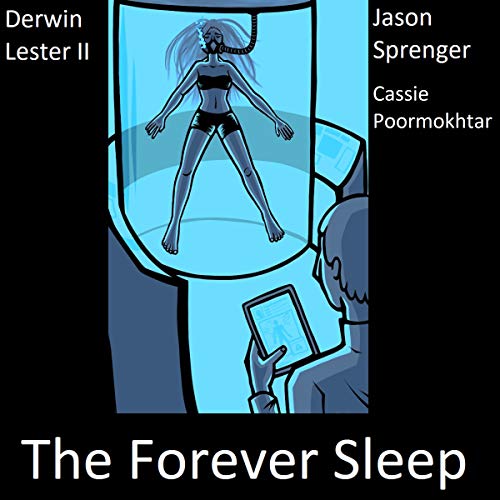 A century ago, the World Government sold it as "Peace On Earth." All they did was convince the citizens of the world to download their minds into the internet, leaving their bodies floating in stasis tanks. Now Sergeant First Class(Ret) Scott Douglas was free to read a book in peace, without having to listen to the hippies and their endless whining. His only job was to walk through the stasis tanks once a day and check for problems. Then the Internet went down. Without it regulating their brains, humanity would be dead in a matter of days. It was up to Scott to save the hippies, even if all they did was complain.

Scott Douglas is a janitor in a world where most of the population has decided to “download” their minds to the internet.

This is a short story, the audiobook is just one hour, the extra minutes are a preview of another of the author’s books. It was not super original but it was entertaining and a quick listen. It might be that this book was written more than ten years ago, but I did not find the word “download” accurate or even correct with current standards. Nowadays we upload to the cloud, we upload to the internet. Downloading is exclusively used for getting from the server to the client or localhost. It was even like that thirty years ago, so I am not sure why the authors chose “downloading” as opposed to “uploading”.

The book is written in first person from Scott’s point of view, and it is written as a logbook. I found the main character and the general tone quite misogynistic. This usually happens when the main character is a male ex-military. There were just a couple of female characters, one was a lesbian and the other was the main character ex-wife. He just prefers his robot therapist as a life partner. Do you see what I mean?

There is an unexpected twist that made things a bit more interesting. A quick and easy read, but maybe not for everyone as I believe it is mostly aimed at a male public.

Jason Sprenger’s narration was adequate. I think he performed Scott well, and it sounded like Scott should. His female voices were lacking, but as there are just a couple of female characters, it is forgivable. The robot’s voice was a nice touch. There are some sound effects at the beginning of each chapter simulating someone writing on paper, which were just okay. They were not too disturbing but the chapters were so short that after a while it was a bit repetitive. I think it would have been okay to use this for the first chapter alone. I am usually not too fond of sound effects in audiobooks, so it was totally unnecessary.