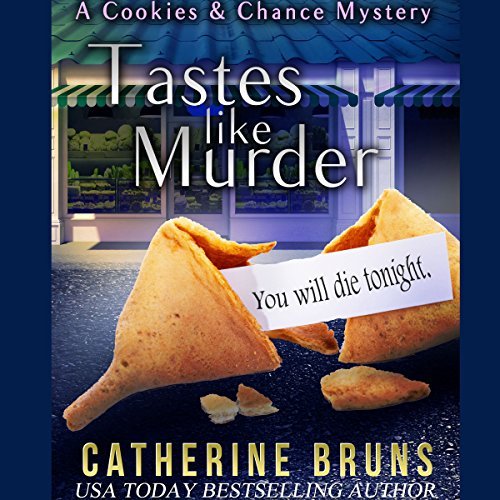 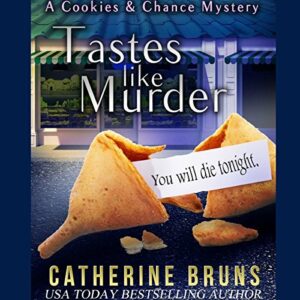 Sally Muccio’s had her crosses to bear: a cheating ex-boyfriend, crazy Italian parents, and an unfaithful husband, just to name a few. After her divorce, she returns to her hometown to start a novelty cookie shop whose specialties include original fortune cookies, served with a sprinkle of foreshadowing. But there’s no warning when her ex-husband’s mistress drops dead on Sal's porch, and police confirm it’s a homicide. Determined to stop her life from becoming a recipe for disaster, Sal takes matters into her own hands. With two very different men vying for her affection, dead bodies piling up, and a reputation hanging by an apron string, Sal finds herself in a race against time to save both her business and life—before the last cookie crumbles.

After getting a divorce, Sally Muccio decides to go back to her home town and open a cookie shop. But coming back means meeting old friends and foes, and Sally might not be ready for that. After being verbally attacked by Amanda, an old acquaintance from high school who stole one of Sally’s boyfriends, Sally discovers Amanda dead just outside her shop. She seemed to have an anaphylactic shock after eating one of Sally’s cookies.

The plot of this book reminded me a lot of Death by Scones, where one of the characters also suffers an anaphylactic reaction after eating something from a cookie shop. Curiously, both books were originally published in the same year, 2015. The rest of the plot is quite different, but it also has all the ingredients that should be in a cozy mystery.

The main character is Sally, from an Italian family that wants to see her married and with children, something typical in cozy mysteries. She has a sidekick, making the story a bit more interesting through the interactions between both characters.

There is a love triangle, totally prescindible in my opinion, but as romance is often an ingredient in cozy mysteries, I think many people would appreciate it. The issue with this is that Sally seems to have no personality, and with a body just in front of her shop, she seems too busy trying to decide which one of the men she will choose.

Something I didn’t like at all is that one of these men is very jealous and possessive, and several people try to justify his attitude towards Sally saying that he had a difficult life. This is no valid excuse, and I think anyone should stay away from a partner with such personal issues. It is like stalking and kissing someone drunk is excusable and could be okay in some occasions. And it is just NOT. The other one wasn’t much better, but it seems everything is okay if the guy is handsome. The rest doesn’t matter at all. What do we need brains for?

Karen Rose Ritcher’s narration was okay. Her languid tone went well with Sally’s weak personality, but her voice range was somewhat limited. Ritcher had three different voices, and things got complicated when there were more than two characters in the same scene. It especially bothered me when Sally, Josie and Sally’s sister were together. Suddenly Sally’s sister sounded like Sally, and Sally like Josie. It was a bit confusing. I also found the narration to be slower than average, and I needed to speed it up a bit to be able to focus on the story.

Despite these minor issues, it was a very entertaining book, and it was fun trying to guess who killed Amanda, and why.