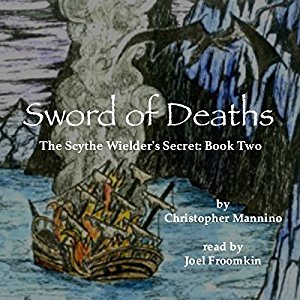 I have received this book in audio format in exchange for an honest review.

This book starts just where the first left, after Suzie fails her final exam, when she realizes that she will never go back home. We are presented with a brief summary about the previous book, which I found quite useful since I have listened to it some months ago.

In this book Suzie, Frank and Billy will be facing new dangers. They witness a ship carrying scythe metal being violently attacked. Elementals’ relationship with deaths has improved since the previous year, but that does not prevent them from being accused of this attack and the the relations becoming tense. Suzie and her friends know that the Elementals are not involved in these attacks, but demonstrating this will not be easy, especially because the real attackers will also go after them.

Some things have changed from the previous book, and one of them is the boys’ attitude towards Suzie, being she the only girl in the world of Deaths. Some of them feel attracted to her and we will face many ‘blushing’ moments that will get old soon. This is a YA novel, and I guess this is normal in this kind of books, but I could have done without it.

I have lost some interest about baskery, Deaths’ official sport, and I listened to those parts without a lot of attention. It did not add anything to the narration but I accept it as part of the set up.

I found this book darker than the previous one, and some things will be changed in a dramatic way. Mannino has managed to get an interesting story going. I give it just three starts and a half because the story ends on a cliffhanger without any conclusion and because I felt the pace was a bit too slow sometimes spent with boys blushing all the time.

I enjoyed Joel Froomkin’s narration. It was compelling and voices were distinguishable. There was just one detail that distracted me a little bit, and it was his pronunciation of the ‘wh’ in words like white or whirl. It was done in the old fashioned way which has the same sound of ‘wh’ in who. This happened almost every time. I just found it a bit distracting.

All in all I enjoyed the book, and I would like what Mannino has in store for us in the next book.