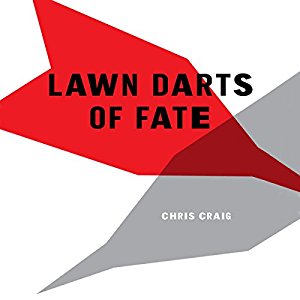 Twenty years ago, Frank Felson was a baseball-bashing, drum-smashing, rock-n-roll lothario. It was pseudo semi-pro ball, and his band was a much maligned one hit wonder, but for Frank, the world was his oyster, and he was shucking it for pearls. Today, Frank's life is a steaming pile of excrement. He's unemployed, his dog has been murdered, and his wife is shacking up with another man. Worst of all, Frank's current band plays nothing but Jimmy Buffet covers. Most people would assume a 42-year-old day drinker with a penchant for backyard badminton and ditch weed had given up. Not Frank. Frank is convinced he'll make it back to the top, fall in love, maybe even learn to like himself again. Can man truly do anything he puts his mind to? Or are we all merely dreamers desperately dodging, the perilously sharp...lawn darts of fate?

Warning: This book contains drug use, hot sex, swinging, drinking and other hijinx.

My original Lawn Darts of Fate audiobook review and many others can be found at Audiobook Reviewer.

Frank Felson has completely lost his way. During his youth he played the drums for a band which got a hit. But none of that is present in the 42-year old Frank. He does not like his job and his wife wants a divorce. Frank gets fired and falls into a downward spiral of drunkenness, solitude, and self-destruction.

This book is presented as a comedy, showing the hilarious situations Frank faces after losing his job and trying to find his way in life. Some of the scenes were indeed very funny, but I had troubles enjoying others, especially the ones in which Frank is out with some friends. It could be that their conversations were too surrealistic for me or that I prefer a different kind of humor, but I think that the real reason is that I might not be among the kind of readers that this book is aimed to.

I found the book quite sad at times. The events were told with humor and irony, but the undertone of this story is a sad one. Due to some unfortunate events, a forty year old man is unable to get over some things and turn the page to go on with his life. He makes desperate attempts to pursue his dreams without thinking twice if it is really worth it.

I liked the cast of characters in this story, they were all quite different and diverse. Their presence help in Frank’s evolution and serves as an excuse for the most hilarious (and sometimes hardly to believe) anecdotes. Even like that, they all have a sad situation with which they live.

I had issues with Frank. I did not find him a likable person, and I was quite bothered with his compulsive liar attitude. This usually happened when he was out with friends, and could have contributed to me not enjoying those parts. I felt like screaming to him to grow up.

Josh Brogadir really became Frank in this story. He was able to transmit Frank’s carefree attitude and bring it to life. He also delivered different voices for all the characters. Something that I found odd was the voice Brogadir gave to Travis, the lesbian living with Frank. She had a deeper voice than most men in the book. I heard a bit of background noise during the recording, which disappeared at the end of each chapter. It did not bother me, but those ‘gaps’ made it more noticeable.

I think it was a good book, with good and bad moments, and I think it will be mostly enjoyed by middle-aged men.