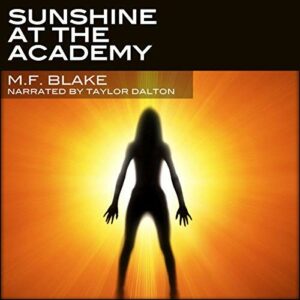 A sexy, slightly-violent young adult book. Its best described as a combination of Twilight, Harry Potter and Enders Game.

Every year, two seventeen-year old representatives from each of the humanoid planets are conscripted to go to the Academy. While there, they are trained to become members of the United Universe, tasked with ensuring the continued peace, harmony and security of the known Universe. Sunshine Blue Mountain is one such student, from the planet Baatar. Over a hundred generations ago, rather than face self-destruction like Earthlings, her race, despite its natural instincts, chose to become peaceful, forbidden to fight. Gideon is a Hadarian. Despite his beautiful features and generous spirit, like most of his race, he is a perfect combatant in the brutal fighting cages. Despite their opposing cultures, they are drawn irresistibly towards each other.

This is the story of their first year at the Academy.

My original Sunshine at the Academy audiobook review and many others can be found at Audiobook Reviewer.

Sunshine is one of the two students from Baatar who enters the Academy this year. They are all seventeen-year-old students from the known planets with humanoid inhabitants, and aspire to become Ambassadors.

This was an entertaining listen, but be aware that it is mainly aimed at young adults. The characters are interesting and their interactions realistic. As an older reader myself, I had issues connecting with the characters, since most of the conflicts in the story are romance related. I did miss a bigger conflict where everyone’s life was at a real risk, and this is why maybe I wasn’t completely hooked to the story.

There is also little world-building, and for someone who is into sci-fi and hard sci-fi, there are many things lacking. I didn’t fully understand why everything was measured in Earth units, being humans despised for bringing disgrace upon themselves, and also the fact that the very few alive were in stasis. It is also not clear why Sunny was sent to the Academy. What I liked was that some virtues were highlighted as positive in the story, and I feel this could serve as educational and moral purposes.

Taylor Dalton’s narration was okay, not interfering with the story, but also not adding a lot to it. There was a lack of emotion on the characters interpretations, and she used a quite monotone tone for the whole book. I think this could have worked so much better with more lively interpretations.

It was a good book, but I insist that I would exclusively recommend it to young readers, and only if they are not into hard sci-fi, since this is quite light stuff. It’s 3-stars for the general public, but I would give it 4-stars for young adults.