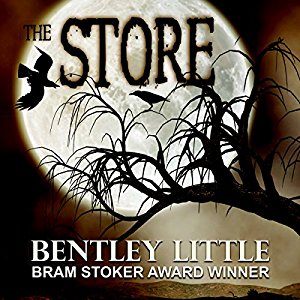 In a small Arizona town, a man counts his blessings: a loving wife, two teenage daughters, and a job that allows him to work at home. Then "The Store" announces plans to open a local outlet, which will surely finish off the small downtown shops. His concerns grow when "The Store's" builders ignore all the town's zoning laws during its construction. Then dead animals are found on "The Store's" grounds. Inside, customers are hounded by obnoxious sales people, and strange products appear on the shelves. Before long the town's remaining small shop owners disappear, and "The Store" spreads its influence to the city council and the police force, taking over the town! It's up to one man to confront "The Store's" mysterious owner and to save his community, his family, and his life!

Bill and his family see how The Store arrives at Juniper, a small  Arizona town, and with it bad things start to happen: wild animals die, laws are bent, and small shops close. The Store promises a lot of good things for the people of Juniper, but there are some unexpected side effects.

If I had to rate this book based on the first half I would have given it 3 starts. The passivity of the main characters was unnerving, and the procedure during the job interview unrealistic, as it also was the girl’s reaction to it all. That almost made me stop listening, but I decided to plunge forward. The first half of the book is also quite slow, and it seems not a lot happens. In hindsight, I realize Little was laying out the rules of the game that was going to be played on the second part.

The book is a clear critique to the consumer culture which surrounds us nowadays, combined with the classical fight between good and evil. The story shows how corruption can reach anybody just if the right occasion arises. But there is hope, because it also shows us that we can find redemption in ourselves through honesty, and if we join forces, we are powerful.

There are a lot of creepy and disturbing moments in the book, many of them I disagree with, but somehow I could not stop listening, like a moth attracted to a flame.

The characters were not especially likable, and this was one of the keys of the story, I think, to show us the good and bad in people, and that one choses their own destiny.

I can’t help thinking that Newman King and his Dark Tower was a tribute to Stephen King and his saga, especially since both write horror.

David Stifel’s narration was perfect, as it always is. His voice is clear, and the characters were perfectly distinguishable. He inflicted the right amount of emotion to the story, and brought the characters to life, making me forget that I was listening to an audiobook. The audio production was flawless. Having Stifel as a narrator already guarantees that I WILL enjoy the book.

This book is not for everybody. As I think it is great as a horror novel, it might be a bit strong for the faint of heart. There are explicit sex scenes and events that some may have a hard time to swallow. But if you like the genre, the audiobook will give you a better experience than the paper or ebook editions.