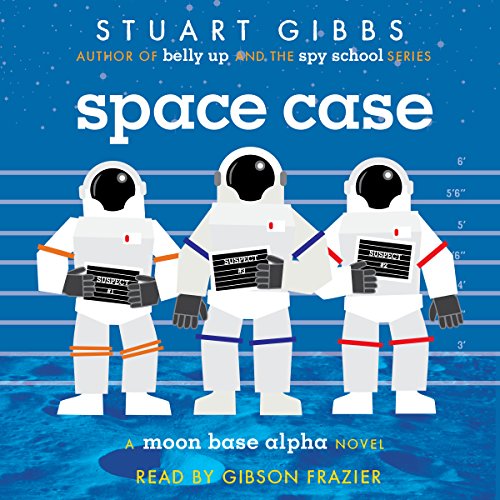 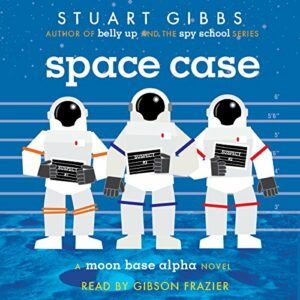 It’s a murder mystery on the moon in this humorous and suspenseful space adventure from the author of Belly Up and Spy School that The New York Times Book Review called “a delightful and brilliantly constructed middle grade thriller.”
Like his fellow lunarnauts—otherwise known as Moonies—living on Moon Base Alpha, twelve-year-old Dashiell Gibson is famous the world over for being one of the first humans to live on the moon.
And he’s bored out of his mind. Kids aren’t allowed on the lunar surface, meaning they’re trapped inside the tiny moon base with next to nothing to occupy their time—and the only other kid Dash’s age spends all his time hooked into virtual reality games.
Then Moon Base Alpha’s top scientist turns up dead. Dash senses there’s foul play afoot, but no one believes him. Everyone agrees Dr. Holtz went onto the lunar surface without his helmet properly affixed, simple as that. But Dr. Holtz was on the verge of an important new discovery, Dash finds out, and it’s a secret that could change everything for the Moonies—a secret someone just might kill to keep...

Dashiel Gibson is enjoying a three-year stay with his family in Moon Base Alpha. Not that he enjoys it that much, as there are aspects of daily life that are far less glamourous once you experience them. They live with a small scientific community and a few other families. Life on the Moon is uneventful and boring, but the sudden death of one of the head scientists changes it all, as Dashiel certainly knows that Dr. Holtz did not commit suicide, as everyone else thinks.

I was looking forward to a light read and this fit the bill. I was not sure I was going to fully enjoy the book, as the protagonist is twelve years old this age and this seems to be the main target age range. At least I could see if this was a book that I could recommend my niece, if nothing else. But I have to say that I was pleasantly surprised by an entertaining story, interesting characters, and an intriguing plot. Dashiel is decided to find out who killed Dr. Holtz, and he will be facing several complications, some of them because he is just a child and the grown-ups can send him to his room. This is though, no childish book, as I initially expected. The mystery is cleverly woven, and Dashiell and his friends will have also to face dire situations.

Alternating the story there are chapters with excerpts to the Moon Base Alpha Manual, explaining certain aspects that appear later in the story. I think it was a nice way to introduce new information without overwhelming the reader.

Gibson Frazier’s narration matched the story well. The character’s interpretations were well done, and the voices and styles had subtle differences that make easy following dialogs. It could have been a little bit more expressive at times, but it was overall correct with a spotless audio production.

I am not going to be recommending this only to my niece or children her age. I think this is the kind of book for the whole family, as it has an intriguing mystery, and relatable situations, despite being the story set on the Moon.