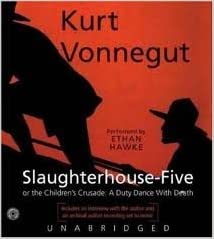 Selected by the Modern Library as one of the 100 best novels of all time, Slaughterhouse-Five, an American classic, is one of the world's great antiwar books. Centering on the infamous firebombing of Dresden, Billy Pilgrim's odyssey through time reflects the mythic journey of our own fractured lives as we search for meaning in what we fear most.

It took me a little while to get into the story, but once I got hooked couldn’t stop listening, and once I’ve finished it I had to listen to the first chapter again. This is the fictionalized experience of Kurt Vonnegut in WWII and the bombing of Dresden. The first chapter is about Kurt Vonnegut himself explaining how he came to write this book and the obstacles he had while trying, mostly in his head. The rest of the book is about Billy, a fictional character who fought alongside Kurt in the war. An anti-hero that wanted to be as far away as possible from everything that was happening, and who was able to escape the present moment thanks to the Trafaasdfjls who helped him to become unlocked and travel in time, because it’s what it is.

This raw emotional ride is a tale of PTSD, desperation, and death. The scars inflicted in the war were carried forever by Billy and his life was forever changed, or was it? This has been one of the books that have moved me the most in the later months. It might not be a book for everyone, but the story told in it is universal, an antiwar song, a hymn to life.

This book made me think of Catch 22. Both are antiwar books, with an antihero as the main character, a victim of his circumstances and his destiny, somebody that just wanted to be as far as possible from the war, the pain, and the death. The satirical tone in both is part of their appeal, and amidst all the absurdity, we get close to the humanity of the protagonist.

This version includes an interview with the author at the end of the audiobook. It was a nice touch to listen to Kurt Vonnegut himself talk about his book, his inspiration, and who was Billy Pilgrim.

Ethan Hawke did a good job bringing Billy Pilgrim to life and narrating the events that happen in the book. He infused the right amount of desperation and acceptance to the recurrent “So it goes” which this novel is famous for. There were audible mouth and swallowing noises from time to time, something that happens with not too experienced narrators, but I didn’t find them too disturbing given the nature of this book. Something that did bother me was that the end pause between the end of the book and the interview. It’s so short that it caught me completely off guard and it didn’t give me time to realize the book had actually finished. I’m not too keen on music in audiobooks, but I didn’t mind the one used in this one to separate some sections. I think adding it to the end would have helped. At least a larger pause was needed. This one even felt shorter than pauses between paragraphs.

This was a book that I enjoyed so much that I’m considering purchasing it (I borrowed this one from the library) because I’m sure it can be read many times and we can get different things each time. Definitely a good companion for Catch-22, which I own and read many years ago. I should re-read it one day.