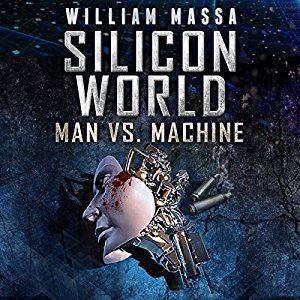 There are three stories in this book.

A powerful virus has killed a great part of the world population and left sterile many of the survivors. This is the time for AI, since androids are needed to perform daily operations and jobs. Things seem to run smoothly but then some rogue androids try to convince the world that they should have basic rights and not to be treated like slaves. Some get to escape thanks to an underground network, and Commander Cole Marsalis, who hates rogue androids with all his guts, is the one that AI-TAC puts in charge to end this for good. In order to do that, the only way is undercover, and to be able to fool an android, the only way is becoming one. But he does not know that the AI-TAC‘s CEO has an agenda.

This book lands, for me, in between Blade Runner and Man Plus, by Frederik Pohl. On the one hand, we learn to see from the eyes of the androids and start to understand them, and on the other hand, we experience the transformation of the main character into something different than human, something that will change his perception and life forever.

At first I thought the story was going to be centered around this transformation, but there is a twist that changes things and gives more depth to the story. This was done in a clever way, and it makes the listener to want to know more and why. I am happy that William Massa has decided to explore this, and it is what has made the story complete.

I like the fact that Massa builds this world in a way that one relates more to androids than humans. It is like we are seeing the other side of things.

The main story is closed but the ending is open, and there is still more to know about the main characters.

This story happens 10 years before the events in Silicon Man. The new android model X3000 is successfully been tested in the space colonies but its arrival on Earth will just enhance the already existing conflict headed by the HDL.  If in Silicon Man androids wanted to count with basic rights, here we see a first glimpse of them wanting to be human.

There have been several cybernetists murdered in mysterious circumstances, and all evidence points to the HDL, but the police will need special help to find the murder behind these macabre crimes.

I always enjoy a science fiction thriller with cybernetic touches because sometimes they make you think about the big questions in life. It is amazing how in an under four hours book we could see some many things, the characters evolving and posing quite some deep questions.

This story is not related to the previous two, but it also about the topic man – machine. The Horizon is on its three year trip to Saturn with 4000 people in cryogenic sleep. Faith awakens in her pod, but something is wrong. They are still in space and there is no one around. She will find out that the crew is dead and that a dangerous enemy is after the colonizers’ lives.

I really admire Massa’s work. I just cannot resist a science-fiction thriller, and this one has all the ingredients to keep you listening till the end. He knows how to give depth to his characters and make them become alive inside the story. I was able to see Faith and Hacker running along the ship’s corridors, escaping from a sure death. There is a lot of action and it is a fast paced story. The length makes this book ideal if you want a story for a weekend.

Joe Hempel’s narration was great, as always. It is clear and he succeeds at transmitting the characters’ emotions. He definitely helps to bring the story to life. His tone and modulation gets you hooked to the three stories. His characters’ impersonation is unique, and I forgot that I was listening to him and thought that was listening to the characters in the book instead. This book was very good, but let me tell you that I know that Hempel will make my experience much more enjoyable than with any other narrator. I will definitely enjoy anything narrated by Hempel!

I truly enjoyed this collection of books and how William Massa has given soul to androids and make it believable. I am looking forward to reading more about this.