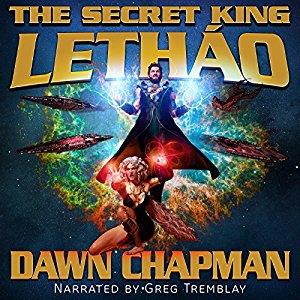 Kendro, King of the Aonise, can do nothing to prevent their sun from collapsing, consuming their home planet Letháo in a single fiery blast. Running out of time and options, he evacuates the entire population, setting off into the unknown galaxy in four crowded ships. Under constant danger from their ancient enemy, the Zefron, treasonous dissent seeps into his inner circle. Threatened inside and out, Kendro struggles with who to trust, until a mysterious vision finally brings hope to the distraught King. A new home awaits the Aonise, if Kendro can only unite them long enough to survive the journey.

My original The Secret King: Lethao audiobook review and many others can be found at Audiobook Reviewer.

Lethao, home planet of the Aonise is under imminent destruction. Their sun is dying and will soon collapse. Kendro, their King, organizes a total evacuation in four large ships. But they have two problems: the Aonise do not have a destination, and they will have to escape and fight the Zefron, their mortal enemies. Sadly these are not the only troubles Kendro will find, since there is some rivalry among the four big houses, and some of them will attempt to assassinate him. Maybe, and just maybe, Taliri will bring some hope to the Aonise and their King.

I had my eye on this book for a very long time, since I follow Dawn Chapman on Facebook, so it has been an honor to be able to review this audiobook. I have to say that I am absolutely impressed, not only with Chapman’s writing skills, but also with her capability for world building and creating well developed characters.

This is a very dense book, with several subplots which add depth to the main story. We are progressively introduced to the characters, helping the listener to remember and associate names to personalities, ranks and jobs. In some cases they are referred by their surname and other times by their given name. This posed no issues for me since Chapman did a very good job in presenting each character and making them unique, and in a way this made them more real. Their conversations and relationships were fluid and felt real. I liked the fact that not all is black or white, and we witness an atypical relationship between two important characters in the book. I guess prejudges are not specific to the human race.

There is a great world building here. We learn about the Aonise society, their customs and part of their biology. I found very interesting and original the birth marks they have on their bodies and how they use their croex (energy) in a way that would seem almost magical to us. Their way of bonding was something unique that added another dimension to the story.

The Aonise have their own language, and we get a glimse of it here. There are some words which are repeated several times, like ‘water’, incorporating the Aonise word to the text in a seamleass way. The chapter titles appear in both Aonise and English, which really shows a great amount of work behind this book.

Greg Tremblay’s narration and style was perfect for this book. He used a neutral accent for the narration and a different accent for the Aonise, making it more credible. Tremblay also gave different voices to the characters, so that it was always clear who was talking. He also transmitted well the characters emotions and succeeded in having the listener immersed in the story. The only issue I found with the audio production was a little noise at the end of a paragraph.

Behind The Secret King there is a whole team working on more novels, 3D designs, and building a complete language. By becoming a member of TSK you can have access to some of these freebies. You can visit their site at http://thesecretking.com/

There is a continuation to this book called ‘The Secret King: First Contact’, in which the Aonise arrive to their destination. I am really looking forward to an audio version of this book. I love the Anoise world, and I hope Dawn Chapman will have more Aonise adventures for us.