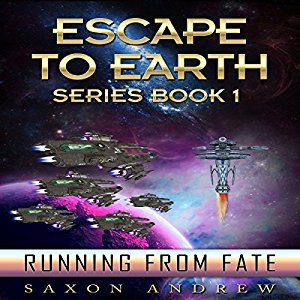 During one of the multiple battles between Welken and Myot, a Welken space ship is destroyed, but one of the Welken soldiers gets to escape in one of the escape pods. He knows the secret location of a planet where the Myot build their weapons and ships and the Myot will try to give hunt to the escaped Welken and prevent him from returning home. The pod has some kind of AI and its main mission is protecting its occupant, so it will seek refuge on Earth and change his DNA to help him mingle with the Boston population.

I had great expectations for this book. The premises were great and, despite not being a very original setup, it had great potential. An alien recently arrived on Earth with changed appearance to seem human just can create a lot of unexpected situations. In this case, Andrew did not exploit this too much and we just see a bit of it at the beginning.

I found some drawbacks though. There is little science-fiction in this book since it is all pure fantasy. The pod converter was more magical than real science, and many of the technological aspects were not explained and sounded really far fetched. It felt strange that the fact that Earth is rich in petroleum was a rare thing in the universe. And the sentence about global warming? Was Andrew serious?

Also, in this book fate has an important role, but the fact that Lucas lands in Boston, and meets in the bar where he works the most brilliant minds that will change the course of human history is just too coincidental.

I missed some more depth in the characters, and at points I had troubles identifying each one. I also had issues with Andrew’s writing style, being a bit clanky at times. I found a bit annoying the reiteration about all the good and bad in humanity, like we are a special race.

And, was not Elora the baby’s name in ‘Willow’? I was a bit surprised by this mistake that would have taken a minute to check on Wikipedia. There were a couple more of details that bothered me, like Lucas’ wrist monitor, never explained, or the fact that there was a little too much romance for my liking, but I understand that many people would have enjoyed this.

Al Kessel’s narration was very well done. My only complain was that at some points he did not make a clear distinction between characters in some scenes, especially the first ones where the pod and Lucas talk, I had troubles following the conversations because the voices sounded the same to me. For the rest he transmitted very well the characters’ emotions and I really enjoyed his narration.

I am not sure I would recommend this book to science-fiction lovers, unless they do not mind some inaccuracies and made up elements. What I recommend is Al Kessel’s narration, and I am looking forward to listening to other books narrated by him.

3 stars for the book, 4 for the narration.