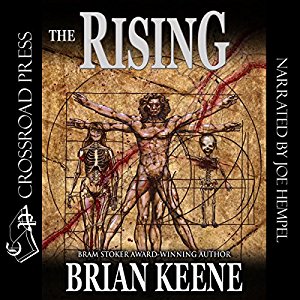 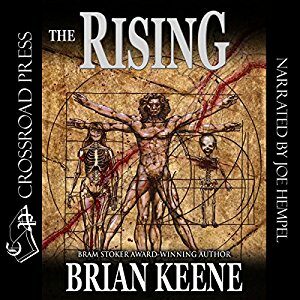 Nothing stays dead for long. The dead are returning to life, intelligent, determined…and very hungry. Escape seems impossible for Jim Thurmond, one of the few left alive in this nightmare world. But Jim’s young son is also alive and in grave danger hundreds of miles away. Despite astronomical odds, Jim vows to find him—or die trying.

Joined by an elderly preacher, a guilt-ridden scientist and an ex-prostitute, Jim sets out on a cross-country rescue mission. Together they must battle both the living and the living dead…and the even greater evil that awaits them at the end of their journey.

After an accident at a research facility, a breach is created on the fabric of reality, and beings from the void are free to pass and occupy dead bodies, animals and humans alike. Jim Thurmond is a survivor. He had built an underground refuge just in case the world was going to come to an end in the year 2000, and when the rising happened, he was safely there. But he gets a call from his son, living with Jim’s ex-wife hundreds of miles away, asking for help; and Jim, without thinking twice, decides to get out from his refuge and get ready for a very dangerous trip.

This is a different take on zombies. Contrary to other zombie stories, here people do not get infected by a virus or bacteria, but just become zombies after dying, leaving their bodies free to be occupied by other beings. This makes the rising a bit slower than otherwise, since being bitten by a zombie does not condemn the receiver unless they die.

Another major difference from the mainstream of zombie stories is that these ones are terribly smart, and they can use the previous knowledge from the body they occupy. We are used to have dumb and slow brain eating creatures, but here the dynamics are quite different. These zombies can use guns and even drive. Their way of gaining adepts is not by just biting but by killing their prey.

These differences made the book a bit more interesting than the average zombie novel.

Multi POV is a plot device commonly used in post-apocaliptic books, and this one is no exception. This makes more dynamic an already quick paced story. I have mixed feelings about it though. It is true that it helped us see different aspects of the rising, and how it affected several sectors of the population; apart from creating several subplots which were tied together at the end. But in this case I felt that Keene had spread his butter too thin, since I did not find any charismatic character that I was able to connect to. I was aware of Jim’s urgency in rescuing his son, but for the life of me, could not feel it. Many tragedies happen in this book, but found myself not too touched by them.

Something also common in post-apocalptic stories is how these great disasters bring the worst in human kind. The crudest aspect here is that people get organized just based on this cruelty. I do not doubt that this may indeed happen if an event like the Rising affects our society, but we see less of the opposite in books at least. I would like to believe that there would also be organized groups without that degree of corruption. Is that even possible? Food for thought for another day. Nevertheless, the ‘good guys’ groups were small and scarce in this book.

It was nevertheless a very enjoyable and easy listen, and although it is a quite long book, it did not find it boring. Just the opposite: it is a fast paced and action packed story.

Now I am going to confess you something. I love post-apocaliptic books but I just don’t do zombies. I had previously read a zombie book in my life, but I was never attracted to this subgenre. The reason for listening to this book was its narrator. I just cannot resist a book narrated by Joe Hempel. His technical and interpretative skills are among the best I have experienced. He gets you immersed in the story, makes you forget that you are listening to a book, and makes you believe you are experiencing something and meeting new friends. His recordings are always spotless, and his clear speech and mastering skills, allow you just to sit, relax, and enjoy.

I am grateful that I gave this book a try, since it allowed me to meet a different kind of zombies, and ‘The Rising’ is almost considered a classic among zombie novels.