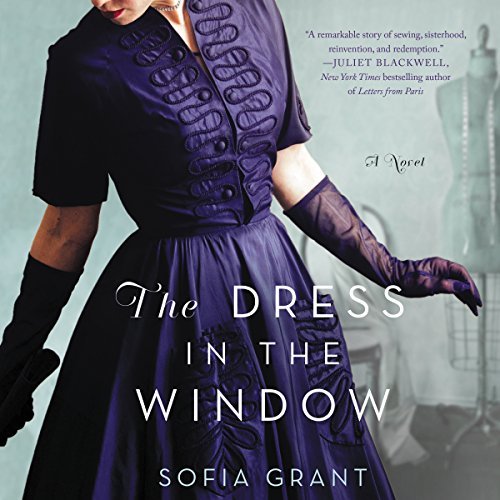 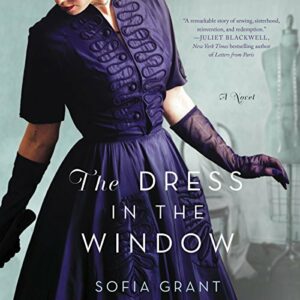 A perfect debut novel is like a perfect dress—it’s a “must have” and when you “try it on” it fits perfectly. In this richly patterned story of sisterhood, ambition, and reinvention Sofia Grant has created a story just right for fans of Vintage and The Dress Shop of Dreams.

World War II has ended and American women are shedding their old clothes for the gorgeous new styles. Voluminous layers of taffeta and tulle, wasp waists, and beautiful color—all so welcome after years of sensible styles and strict rationing.

Jeanne Brink and her sister Peggy both had to weather every tragedy the war had to offer—Peggy now a widowed mother, Jeanne without the fiancé she’d counted on, both living with Peggy’s mother-in-law in a grim mill town.  But despite their grey pasts they long for a bright future—Jeanne by creating stunning dresses for her clients with the help of her sister Peggy’s brilliant sketches.

Together, they combine forces to create amazing fashions and a more prosperous life than they’d ever dreamed of before the war. But sisterly love can sometimes turn into sibling jealousy. Always playing second fiddle to her sister, Peggy yearns to make her own mark. But as they soon discover, the future is never without its surprises, ones that have the potential to make—or break—their dreams.

This story, set in the late 40’s just after WWII, narrates how many aspects of society changed due to the end of the war. We get the perspective from three different women: Jeanne, her sister Peggy, and Thelma, Peggy’s mother-in-law. The situation affected them in very different ways. Jeanne lost her fiancee, while Peggy lost her husband, leaving her with a child. Thelma gave them both refuge, since goods are scarce, but the three of them all suffer the consequences of the war. Jeanne works as a seamstress, while Peggy makes the designs on paper. Together they are a good team, but not good enough for the times they lived in.

Something that motivated me to listen to this book is that there is much sewing related. One of my passions is sewing, and I especially like the styles in the 30’s, 40’s, and 50’s. In this book we read about how the clothes industry changed with the war and after it: with fabric rationing came narrower skirts of not more than thirty inches in length, lack of pockets and cuffs and lots of mending. Some years after the war the industry started to slowly pick up and tendencies changed. Christian Dior’s full and long skirts became popular, and America answered back in its own way, revolutionizing the industry and making it accessible to the public with quality RTW and the use of new fabrics.

This is an engaging story, but I am fully aware that those interested in the fashion industry or just home sewing will be the ones who most rejoice at this one. There are quite some technical words sewing and fabric related, and the beginning of each chapter is dedicated to a specific type of fabric, describing its qualities, uses, and even giving advice to work with it.

Now about the plot. I was quickly absorbed by the story of these three women, which imperfections brought them to life. They felt like real people, with their problems, insecurities, and also successes. Something that bothered me a bit was the constant lack of solidarity among women, the critiques, the envy, the will to destroy each other. I know this often happens in women environments, but I want to believe that we are not all the same, and that it is possible to find sorority and understanding among our female friends.

The story is mostly slowly paced, but I really enjoyed every step of the way, and the evolution of these three women. I was so invested in the story that I could not put it down. There are a couple of twists that made the book even more interesting and helped to give a feeling of reality, and showed that nothing is black or white, and that sometimes somebody can cause great harm to another one, even with the best of intentions.

Even when the 40’s-50’s is an era that esthetically inspires me, I know we have it somehow idealized; and we are witness in this book of the unfairness toward women, the difficulties put there by men, and in many cases by other women.

The other reason for me to have listened to this book is that it is narrated by the wonderful Teri Schnaubelt. She is one of those narrator that guarantees a fine final product, with perfect audio production, very clear diction, amazing interpretation skills and an ample range of voices. With Schnaubelt the only thing that you have to do is sit, play, and enjoy.

I know the public for this book could be quite specific, but I would totally recommend it to all those who are interested in sewing and how WWII affected the fashion industry and the lives of women.