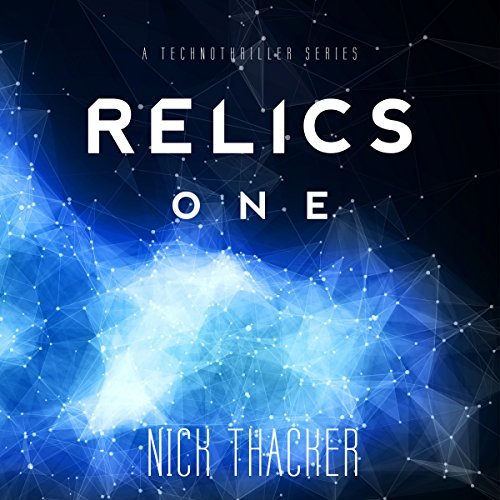 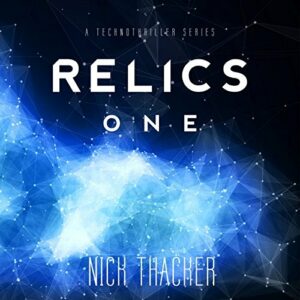 A computer system controlling the world's resources. An ex-President who can't remember anything from the past fifteen years. Semi-insane survivalists that live and exist off-the-grid.

Myers is a Relic. Cast out of society by a computer program that's far more efficient at managing and regulating human life than any human ever could be.

The System is running everyone's life. It's quickly becoming smarter than humans, and it no longer has any need for leaders like Myers. There's a technological singularity coming, and only Myers knows how to stop it.

The problem? He doesn't remember anything from the past fifteen years.

And now he's being hunted...

"Relics is another gripping technothriller full of suspense and action from Nick Thacker, the author that brought you The Enigma Strain, the best-selling action/adventure and conspiracy thriller!"

Myers wakes up in the middle of nowhere finding out that he is a Relic in a world controlled by a very advanced AI. He has no memories from his past life, and when entering Istanbul he discovers that he is wanted. Myers will get some glimpses of his past while he tries to understand how the world now works.

I was looking forward to this book, since the premises were very interesting and I usually enjoy books about dystopian societies; but I was not able to get into this one. The story felt disjointed and confusing at times. I know many details were hidden from the reader so that we could discover things along with Myers, but I missed some background, descriptions, and in general a clearer view about the world and Myers’ surroundings.

I found all the characters terribly one-dimensional. We get some details here and there but not enough to have fully fleshed characters. I just didn’t care for them, their past, or their future. I would also like to mention that there were no important female characters in the story. There were just two secondary female characters and one was really caricaturesque.

The concept of singularity in this story was not very well explained, and I was kind of lost most of the time. I still don’t know how some important events in the book are related. There was plenty of action, and in this sense it was an entertaining book, but I missed some more substantial background. Sadly, this book failed at making me curious about it. Not sure I will continuing with the series.

David S. Dear delivered a great narration, transmitting the characters’ emotions and making distinctions among voices, so that all characters were easily recognizable. Dear’s narration really improved this story. It was the only thing that pushed forward me to finish this book.

It saddens me that this could have been a great story but it just felt like a draft that needed to be more developed and polished.