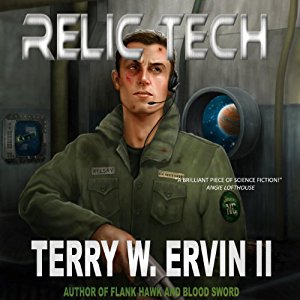 The Silicate War has been over for fifteen years, and the tension among the dominant galactic races is growing. Many fear that the Umblegarri, the ancient alien race that ushered humanity into the interstellar galactic community during the Silicate War, have been targeted for conquest by the Crax and their allies.

It’s no longer speculation. The invasion is underway and Kra finds himself strapped to a hospital bed, critically injured and surrounded by hostile corporate lawyers, high ranking military and intelligence officials, ambitious members of the criminal justice apparatus, and an Umbelgarri diplomat. All are demanding answers or their pound of flesh.

Krakista Keesay, a Class 4 Security Specialist, doesn’t have the answers they demand. Why did he sabotage a top secret research facility? What was he doing on a quarantined planet? Why did he set up the civil transport Kalavar for destruction? Is that all? Not even close.

Kra turns to his only option: Allow his brain to be hooked up to an experimental device so that he might prove his innocence.

Or lose his mind.

“Relic Tech is a brilliant piece of science fiction space opera, with edge of your seat action, space battles, aliens, characters you can love (and hate) and a plot that catches you from the beginning and pulls you through to the end. You'll be cheering for Specialist Keesay all the way through this thrilling ride!” —Angie Lofthouse, author of Defenders of the Covenant

My original Relic Tech audiobook review and many others can be found at Audiobook Reviewer.

Krakista Keesay, a Class 4 Security Specialist, find himself strapped to a hospital bed and accused of crimes against humanity. The worst part is that he doesn’t remember a thing, and the only way to defend himself is using a procedure that could fry his brain. But he has no choice. This will be the beginning of the Crax wars.

The premises of this book were great. Our main character is accused of something he is sure he did not do, but as he does not remember anything, they will have to use a dangerous procedure to fill in the gaps. I think the intrigue was well built, and I felt quickly interested in what could have happened to Krakista onboard the Kalavar.

There are a lot of characters in this long book. Most of them are two dimensional, but we get an accurate picture of Keesay. A paranoid know-it-all security specialist, with great passion for old guns, and prone to make friends and enemies with great ease. All this qualities make of Keesay an unlikable person for many. I have to say, that despite the fact that I shared some of his motivations, I had some troubles to really understand him and connect to him.

This is an action packed book, with many characters and events, but I have to say that it feel a bit too long winded for me. I started it with great interest about finding out the truth but there are quite some parts in the book where nothing important happens. I agree that they help in giving the reader a picture of Keesay, but in my opinion, the book would have benefited from having these parts edited. I refer to the parts where he is shoot practicing with his mates, or picking up fights. I am not saying that they should not have been included, but they felt too long for me, and made the story drag. They also felt too much like a testosterone competition.

Despite this being quite a good story and having a unique main character, I found something missing. Somehow I lost my interest along the way, and in the end I did not really care for Keesay. It is like the story missed a soul.

I really enjoyed James Conlan’s narration. I have read reviews complaining that he does not have an ample voice range, but I disagree. I think the characters were easily discerned, and anyway, there are many characters in this book, which makes it a difficult one for narrators. I think Conlan did an excellent job in portraying characters and keeping it consistent. The beginning of each chapter contains bits of History and knowledge about this world, and Conlan used a different accent for these parts. I think this worked very well in differentiating this parts from the rest. Conlan also used sound effects for some alien characters or when the voices came from a radio. This was very well done, and the audio production was perfect.

I think this is quite a good book, but felt a bit long in some parts. I think it could be mostly enjoyed by military sci-fi fans.