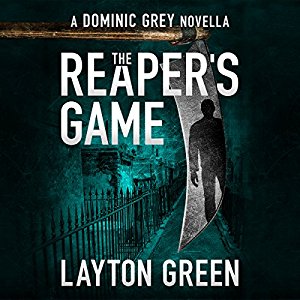 Is it murder from beyond the grave . . . or the final ruse of a twisted serial killer?

Less than a week after the lethal injection, Sebastian Gichaud, a wealthy playboy grieving over the death of his mother, threw on a black cloak and hacked the prosecutor to death with a giant scythe.

Not only did Sebastian appear to be fulfilling the serial killer’s last wish -- he claimed that he was the Halloween Killer.

Now, as the anniversary of the grisly murder approaches, Sebastian is facing trial. No one will touch the case. In a desperate attempt to save his son, Sebastian’s father hires Viktor Radek, professor of religious phenomenology, to investigate.

If Sebastian is guilty, Viktor wonders, then why are he and his associate Dominic Grey being warned off the case? And why did the Halloween Killer visit a series of reincarnation experts before his death?

None of Professor Radek’s doubts might matter, because he and Grey face the impossible task of convincing an Orleans Parish jury that Sebastian Gichaud is either a prisoner in his own mind – or possessed by the spirit of the Halloween Killer.

(Note to fans of the Dominic Grey series: The Reaper’s Game is a standalone novella that takes place earlier in time than The Shadow Cartel.)

Stay tuned about Layton’s new releases through his newsletter at http://laytongreen.com/icontact.

Sebastian Gichaud is in jail for killing the New Orleans DA with a scythee and dressed as Death. The murder reminded the public of the ones perpetrated by the Halloween Killer, sentenced to death some time before. The most notable thing is that delicate and sensible Sebastian seemed a completely different person from what he used to be, and he himself proclaimed to be the original Halloween Killer. In a city where voodoo and other powerful powers are among the most normal things, everything is possible.

This is the fifth book in the Dominic Grey series, but as it is, in fact, a prequel, it can be read as a stand alone novel. I have not read the other books in the series, but this did not prevent me from enjoying this story. I not usually a fan of paranormal, but this book is so well written with such powerful characters that it kept my attention from beginning to end.

Dominic Gray and Viktor Radek will be known to fans of the series, but they were knew to me. Nevertheless I got a clear idea about who they were and how they worked their cases. The book is written in a very cinematographic way, which made me think that I was watching a movie. A movie based on this book could be a total success. It somehow made me thing of Edward Norton’s Primal Fear.

The audiobook is less than four hours and a half, which makes it a quick listen. It is really worth it, since there is not a minute wasted on this. Sometimes I feel that some books are longer than they should, and that some parts should have been cut out in favor of the story. Not here, it is an action packed book with nothing to spare. It is just as it should be.

What made this book even greater was the superb narration by Peter Berkrot. He juggled voices and accents like if it was the easiest thing in the world, delivered great characters’ interpretations and gave me the feeling that I was watching a movie with a full cast of actors.

Both writer and narrator were new to me, but I will definitely try this series from the beginning, since these books are very well written and the narration is one of the best I had the pleasure to listen to.