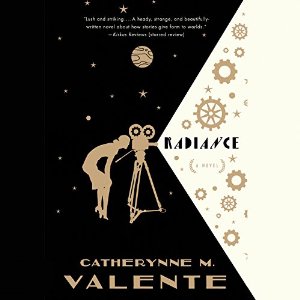 My original Radiance audiobook review and many others can be found at Audiobook Reviewer.

Set in a parallel universe, Radiance is a mid century decopunk pulp science fiction novella. The solar system or Radiance is much different to ours, and it has reminiscences of the first years of science fiction cinema. I could not help but think about Melies and his conception of the Moon. Nevertheless the Moon in Radiance is the equivalent of Hollywood, where movies are made, where dreams are born. At the end of the 1800s the man has reached the starts, and thanks to the callowmilk, living and striving on other planets is possible. There are many creatures and things populating Valente’s worlds, and they have names of things from Earth because they remind us of them, not because they are equivalent or similar. The callowmilk is produced by mysterious creatures called callowhales which live in Venus. Don’t subestimate the callowwhales, because their role will be crucial in this book. The story revolves around the several interpretations and guesses about Severin Unck’s disappearance. Daughter of one of the great film makers on the Moon, she decided to escape the manipulation of reality and went into docudrama. When going with her team to Venus, to investigate the mysterious disappearance of the town of Adonis, where just a lonely child remained, she herself disappeared too, and several members of her crew resulted dead.

In order to cope with her lose and try to find out what happened to her, Percival Unck, her father, tries to write a script for a film about her life. The book is just a collection of scripts, in several levels of evolution, reels, dialogs, and tapes. This is one of the things that makes this book difficult to follow. All the time I had the impression that I had arrived to a room where two people were in mid conversation. The world was not properly introduced, same for the characters. I was confused by some of them, and they never gained the proper depth to make me care for them. A story is made of shape and a plot. The shape here was a beautiful and artificious prose, but the plot was quite simple. The problem was in how it was delivered, making it confusing on purpose and at times I was not sure if I was listening at what really happened or a fictionalization made by Percival. The same scene could be watched twice, from different points of view, but also incongruent. Lies and more lies, and watching thorough a lens.

This book is not for ones light of heart, nor for the ones who want an easy read. Some people think that audio is not a valid medium for this book due to its confusing nature and the use of several sources, but as this book is quite demanding, I am not sure if I could have been able to actually read it (and be able to go on with my life).

Nevertheless I loved the prose, and although nobody is supposed to talk like the characters in this book, listening to them was a real pleasure, and only for it, this book is something special. Catherynne Valente is a magician with words, but I cannot help feeling that she would need to focus more on the story to make it more compelling to the reader. It feels like she wrote with her brain but not with her heart, even though there is an inherent sadness to the story.

And there is a trick. At the beginning we are told that there are no endings, just beginnings, and it is a bit how I felt after finishing the book. I spent hours carefully listening (you do need to listen carefully to this one to avoid missing any detail) to find out what happened to Severin, and we are never plainly told. The end of the book is a theatrical conversation between the characters in the book, and things cannot get more surreal. We get a partial answer, kind of ‘you decide what it is’.

Something that I also felt tricked about was with the fact that there is a lot more magic than science fiction in this book, at least if we know all that we know nowadays. It could have been a wonderful film of the Golden Era, and I think it is what it means to be. I loved some of the stories, I just hoped they were better tied in together.

Heath Miller could not have been more perfect. I think of this book being narrated by somebody with a plainer voice and I think I would have failed at it, but Miller got in the soul of each of the characters and I was almost able to see the reels about callowmilk. Miller has demonstrated to being able to adapt like a chameleon.

This review may seem a bit chaotic and disjointed, but after listening to this book, this is how ideas are coming to my head. If you want to enjoy a book just by the mere pleasure of reading (or listening), this could be for you. Just do not expect that everything will make sense in the end and you will be fine.