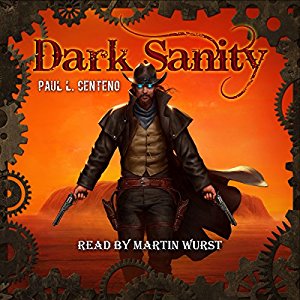 I have received copy of this book in audio format by the narrator in exchange for an honest review.

Flint Cross is a gunslinger living in post apocalyptic Australia. The world is desolated due to sun flares which killed most of the population. People needed to adapt to the heat or die. Flint is disturbed many night by dreams that result to be pieces from a past life. He will have to seek the aboriginal tribes for help in finding out the truth behind those dreams.

Despite the initial premises, this is not only a book with western reminiscences set in a post apocalyptic Australia. We are in the 54th century and there are other worlds and technologies that Flint will have to rediscover, along with his true identity, his lover and his mission.

I found the beginning of the book quite enjoyable and it really picked my curiosity. The set and characters were interesting, and the mystery behind Flint’s dreams made me want to know more. The characters were well portrayed, and we get enough information to make a well built story. But when Flint realizes that his dreams could mean that he had a different life and acts upon it, the rhythm and atmosphere suddenly changes. If I felt that the beginning was slowly cooked, the middle and especially the end of the book were rushed. We did not have enough time to know Flint’s friends and find out why he needed to complete his mission. Also, the information from the middle to the end was given in a very artificial way, through monologues from secondary characters. The ship building felt rushed, without any detail about the design or construction. I think it would have been interesting seeing how Flint starts remembering about technology. This is one of the aspects which makes this book non science-fiction but mere fantasy.

We get glimpses of the dimensional synthesis but we do not get the complete explanation why this will mean the cosmos destruction. I think there was a lack of fundament here.

I had troubles with the names Amanda and Amara, and got confused at times whether Flint was referring to one or the other. In hindsight I think this similarity was intended, but for me it did not add any value and made things confusing.

The narration was very well done, except for a couple of audio inserts that were a bit evident. The diction was clear and the voices well differentiated. I was bothered about the voice of a couple of characters, but in general I enjoyed the narration, especially how the Australian accents were done.

I enjoyed this book, even though I think this would have benefited from a longer a deeper exposure, even fragmenting the story into several books.